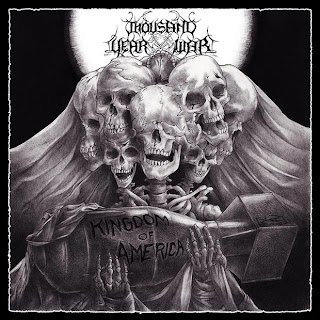 Ho-lee fuck!!  That was my initial reaction to opener and title track “Kingdom Of America”.  I actually said it out loud.  Then I played the track 2 more times because it just felt so good.  It IS so good.  Welcome back Thousand Year War!!!

I'll admit it, I'm a fan of this band.  I reviewed their previous release and also did an interview with Hiram Lohr, the multi-instrumental mind behind the band.  I was looking forward to hearing the new stuff.  And when you hear something that you are anticipating and it still blows you away, then job well done!

This is melodic death metal at its best.  Which to me means that the melodic side of the music is there, but it doesn't take over and detract from the death metal.  It is there in the proper portion.  And this music does not wuss out.  There is plenty of brutal goodness to be had.  In fact this has a very angry edge to it.  This is music that sounds as though it's creator is kinda fed up with things and has some shit to say about that.  Title track “Kingdom Of America” literally explodes out of the speakers and just rages.  Rage in music is good, it provides us a much needed release.  Let's face it, life sucks most of the time, and I, for one, am always glad to have music that feeds that rage.  For me it helps me release the rage so I don't kick my cats across the room or do something much, much worse.

“Weep As We Die” is the second track and is more down tempo.  It has some great riffs and guitar work, and there is a fantastic guitar melody that winds its serpentine way through the song.  Then we have “London Dungeon” a Misfits cover that works very nicely with the original songs here.  “Doom Rides These Mountains” is an instrumental track and well written.  There are some very cool changes in tempo and time signature.

The EP closes out with “Vulture Eyes” and “Gather The Wolves”, two absolutely face melting blasts of what is right and good with this genre.  As I've said before about this band, although they hail for the good ol' USA, they definitely have a very European sound, and given that melodic death came from Europe, that is a good thing. They do not ape what has gone before, they make it completely and wholly their own.  This release just crushes, and I can't recommend it enough. It gets the blood pumping, the heart firing on all cylinders.  It makes you wanna saddle up with Thor and go beat some frost giants to a fucking pulp.  It does what all music should; it makes you feel.  Now leave me alone, I need to go listen to this like, 20 more times in a row.