Mahnhammer – Above The New Frontier 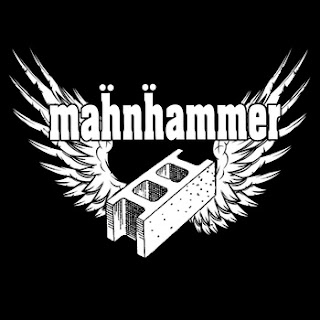 Ah, Mahnhammer.  I know these guys personally.  We live in the same town.  I've interviewed them on a radio show.  I've introduced them on stage.  And thanks to this ass kicking release, I get to tell you all about them.

And my bad for not doing this sooner, as this has been out for about a year and a half now.  Mahnhammer are a little bit difficult to define exactly, so for those of you who need to have that in your life, I'll let you figure it out.  They have been voted best metal band in Tacoma 2 years in a row, but they don't consider themselves to be metal.  I would have to agree.  They are most definitely heavy, and they are most definitely loud, and they put on a great show.  But like a lot of bands I've been reviewing lately they also don't fit in a nice little cubbyhole.

Punk and sludge are two words that come to mind in describing these guys.  And I did mention heavy above there, right?  They have a great knack for song titles as well.  “Black Seers and Fire Eaters” is one of the best song titles I've heard in a long time, and it is my favorite track from this album.  “Honky Knife Fight” just conjures up an image, doesn't it?  I'm picturing two Joe Dirt looking guys out behind the bar about 3am on a Saturday night, drunk off their asses, staggering circles around each other while holding butter knives they stole from the bar.  That's just me though.

“Choate” comes charging out of the gate with some driving drums, some nice feedback, and then the band is unleashed, ripping you a new earhole.  Then we get “Hey, You're Not The Sound Guy”, which brings a whole different feel.  This one is more sludgy and wouldn't be out of place on a Down CD.  “Music Hath Charms” comes next and is a definite mash up of the punk and sludge influences.  It sounds like punk raging along but dragging an anchor behind it so it gets slowed down a little bit.  We get the aforementioned “Honky Knife Fight” and then “A Quick Dip Into Atmosphere”, which is a bit atmospheric, or at least as much as a band like Mahnhammer gets.  “Black Seers And Fire Eaters” comes raging along after that.  Then we wrap up the festivities with “Mr. Balloon Hands”, which is an interesting track.  The band stretches out a bit and shows a little groove, which melds nicely with the other elements on display.

If you've read my recent reviews and got into the new releases from Batillus and Call Of The Void, this one will be right up your alley as well.  They are not exactly alike, and where would the fun be in that, but they are similar enough that you won't be wasting your time with this one.  So go ahead, stretch out a little, try something new.  Try something that doesn't fit nicely and neatly into a box.  Try a little Mahnhammer.