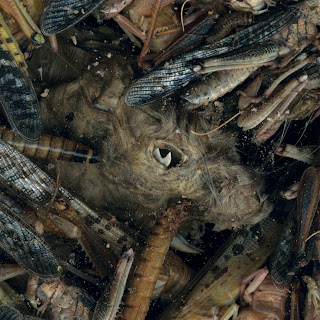 Belgium’s Hessian Is Going to Kick You In the Teeth, And You’re Going To Like It


As I sit here listening to Hessian’s new LP, Manegarmr, I’m thankful that my dog is not in the room with me, because this record gives me the insatiable urge to fight the nearest living thing.
When someone says “Belgium,” some people may think waffles. I used to be one of those people; until I allowed the Belgian brutes in Hessian to pummel me senseless with their particularly dark brand of blackened (REALLY blackened) metallic hardcore. Now when I hear the name “Belgium,” I shiver and worry whether Hessian is going to kick-in my door and then kick-in my head. Should I mention that this is a good thing?

What I love most about their latest outing is their extra blackened sound. The album’s opener, “Ascension,” fools the listener into thinking that they are listening to a black metal band, and a good one at that. That is until the 30 second mark, when the band decides to crank the kick-your-ass knob up to 11. The guitar lurches and groans with its bone-dry tone, the drums kick into a fierce punk beat and the vocalist jumps in to grab your attention by the throat and refuses to let go for the duration of the LP.

The rest of the record is sprinkled – if that’s the right word for this type of music – with blackened riffs and textures that break-up what is often monotonous and boring about metallic hardcore. “Vamacara,” which appears in the middle of the record, is an ambient, sinister intermission right before “Swallowing Nails,” which sounds just like it sounds as it swallows you in its despairing and destructive blackened atmosphere.

Conversely, the title track, “Manegarmr,” is 1.5 minutes of spit-in-your-eye Converge-esque hardcore which segues beautifully into the final track, “Mother of Light,” which can only be described as: fucking terrifying. The truth is, all of Manegarmr’s 10 tracks are a seamless blend of black metal and metallic hardcore.

I should also mention that these guys know what they are doing. They have serious chops. By listening to them for more than a minute, it’s easy to get the impression that these gentlemen don’t fuck around. They take their music and their playing seriously, and they don’t seem content with just throwing out an album filled with a smattering of angry noises; there is direction and intent behind this aural-onslaught.

For all these reasons and more, I think you should buy Manegarmr when it comes out April 30. Just remember to wear a helmet and tell someone what you’re listening to so they won’t be too shocked when they discover your thoroughly satisfied corpse the next day.

To wet your beak, here’s “Plague Monger” from the new record.

If my balls were grapes, this band just made wine