Devil to Pay - Fate Is Your Muse 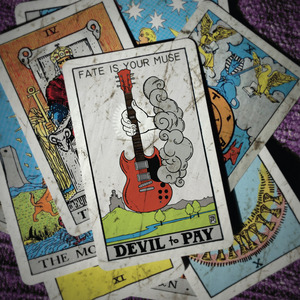 By now you have seen the reviews and press that has been garnered by Indianapolis, Indiana’s Devil To Pay regarding their new album Fate Is Your Muse and for good reason.  Fate Is Your Muse is a hard hitting modern heavy rock record locomotive full of punishing riffs and ethereal lyrics.  I’d suggest getting on the train, because as they say...”This Train Won’t Stop”.

Devil To Pay has been plugging away across the Midwest for over a decade now, only recently finding a home on the Ripple Music label.  Signing with a real label has been a long time coming.  According to DTP’s singer/guitarist/frontman, Steve Janiak, the band was assembled quickly and found themselves on a local battle of the bands.  Shortly after that, they signed with a local label upstart, Benchmark Records, but the label fell apart.  The early hype certainly wasn’t a fluke, but the band has since seen many ups and downs that would crush most band’s ambition. You can pick out a relatable frustration in the song “Wearin’ You Down” where Janiak sings “a tip of my hat to you for wasting my time”  and in “This Train Won’t Stop” when he sings “It’s like your riding in a beat up truck but the beat up truck won’t go”.  While the songs seems are more about dealing with ignorant arrogance of existing in today’s world, the sentiment carries a familiar theme in DTP’s catalog.  In fact,  this is the general  theme of Fate Is Your Muse, urging you to get it while you can, you are only here for so long, and don’t sweat the small stuff.

Following “Wearin’ You Down” is “Already Dead”.  It’s another statement of existence and the reasons for it. “Already Dead” is the song from which the album’s title is pulled in which it states “Fate is your muse.  The end is what we choose”.  It seems that Janiak’s lyrics are pulling from his experiences over the last decade with the band and exhibits a hope of evolving while dealing with the everyday drudgery of trying to pursue one’s hopes and dream in the semi-isolation of a flyover state like Indiana.  There’s not a lot out there among the rows of corn and soybeans, but it leaves time to craft one’s ideas separate from mainstream trends and ideas and develop an artistic statement that is lost in the wash of music and art scenes that are more diluted by the per capita of artists.  It’s this sort of environment that gives DTP their well honed musical and creative edge that sets them apart from most bands that have similar dynamics.  That and Janiak’s ever present soulful wail combine for introspective journey through the mind of someone who has faced a near-death experience and come back to explore the relevance of human experience of existence on the physical plane.

While the album has a dark and serious tone, there are moments pure fantasy, while still dark, that can be rather entertaining story telling.  “Ten Lizardmen & One  Pocketknife”  seems to play off of David Icke’s idea of a supreme reptilian ruling class masking themselves for the sake of observing and researching humankind.  This song is lighter in tone than the rest of the album and is more like a musical comic book being voiced through Janiak’s sense of humor and vocal showmanship.  He even goes into character at with line “silence the human, the research must go on”.  If this whole music thing falls apart, Janiak could probably get work as a cartoon voice actor.  It’s that entertaining.

Another point of this album that is worth mentioning is the production job done Azmyth Studios.  This is where DTP recorded their previous records and the quality of tracks contained in  ‘Fate Is Your Muse’ stands up to their standard (a standard that is as good as the records put out by labels with larger budgets and better than most self releases in the “Stoner Rock” genre).  Chad Prifogle’s  booming drums and Matt Stoke’s warm  bass tone combine to drive the guitars in the subtly bombastic approach the band has become known for.  They are a tight and heavy rhythm section.  While Janiak takes care of most of the guitar solos, the band’s newest member (of 5 YEARS!), Rob Hough, lays down the albums most memorable solo during the extended outro of the one of the album’s many highlights, ‘Yes Master’.  Brooding and atmospheric, the song opens with an ascending riff reminiscent of Thin Lizzy’s double guitar harmonies, just much slower.  ‘Yes Master’ has been my favorite doom track release so far this year.  It crushes.  Clocking in at just under seven minutes, the vocals don’t even kick until two and half minutes in.  A song about the futility of fighting one’s destiny in life, the lines “time’s no friend, he’s born to lose” and “wait your turn and remember the tune, the song of songs everyone must croon” is a poignant reminder.   The song’s climax comes with the Beatle-esque phrasing of the lyrics “the world descends depending the frequency you send”.  It is obvious that this record was crafted from an experience of enlightenment, not just understanding that something isn’t right in the world.

‘Fate Is Your Muse’ is a fantastic album. It may not be a game changer, but it is set to be on many year end “best of” lists, whether it would have been picked up by Ripple or not.  DTP’s grass roots approach, solid work ethic, and careful song craft have set this band apart from the pack for the last decade. “I don’t mean to spoil it for you... you get what you disperse”.  DTP practices what the preach and it shows.  This is the record that should set them up for a new decade of dominance.

‘Fate Is Your Music’ is set to be released April 9 on Ripple Music.  Mark your calendars.