Crankshaft And The Gear Grinders - What You Gonna Do? 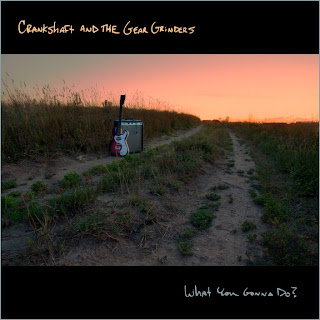 You want to go on a trip with me? Are you sure? Cool because we're heading down through Mississippi into Louisiana with New Orleans being our destination. Our tour guide is Alex"Crankshaft"Larson and he will take us past the usual tourist traps and to the heartland of NOLA, where the real stuff takes place. So buckle up and prepare yourself for a journey deep into the Delta. Hey...wait a minute! What's going on? We're heading in the wrong direction, damn it. This vehicle is heading north....come on now, turn around Crankshaft!

...and welcome to Anoka County, MN where Crankshaft And The Gear Grinders are from. My knowledge of Minnesota is limited however I do know it can be a cold-ass state but with music this hot and seedy you can thaw perma-frost in two minutes. Hell, you can stop a full-blown blizzard with this band. Maybe it's the cold climate that got main man Crankshaft into this kind of music that he calls Pork Neck Boogie. Regardless, it's shit hot and...I still get heavy vibes from delta blues alright!

Apart from the delta blues input you find equal parts of Tom Waits, G.Love And Hot Sauce, House Of Freaks, Mardi Gras and plain old emotions and fun in the band's sound. And damn, it's infectious. I've listened to What You Gonna Do? in my truck a lot and the album is a straight up traffic hazard. Once I hit play I start to groove in my seat, playing all kinds of air instruments and if I wasn't wearing the seat belt I would probably try to dance...while driving! I'm telling you I'm the biggest traffic hazard around listening to Crankshaft And The Gear Grinders. 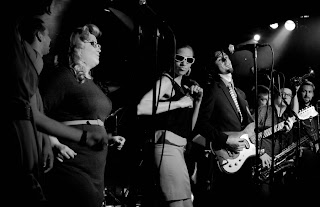 Starting out in 2008 Crankshaft has been pretty busy recording and touring as a one-man band, Crankshaft, or with his backing band The Gear Grinders. Strictly DIY either venture releases their albums via the local label Slab Town who only works with local talent in order to spread their music to a wider audience.  And this feeds off on Crankshaft And The Gear Grinders because it adds to the sincerity of the band because apart from being shit hot and seedy there's a genuinity to their music. And even more importantly they seem to have a blast playing this stuff....and I want to join the party.

Do you have a bad day and you need to be uplifted? Or you just want to have a good time? Look no further, Crankshaft And The Gear Grinders have the remedy for you and that remedy is What You Gonna Do?. If this album can't get you going and make you feel better, then I don't know what is wrong with you. Because this is hot, rocking, hypnotic, groovy, infectious and damned good music. No I'm wrong, it's damned fantastically great music! I mean I'm up dancing to this and that only happens if I'm drunk or if I have lost my marbles all together and none of that applies right now. So get your hands on What You Gonna Do? and join in folks!!!

This shit rocks!! Found it via reading the Buffalo Clover review via the links at the bottom. Always good for a few diamonds in the rough at the Ripple.