CHOSEN Comments On Over 5,000 FREE Downloads of Debut Album ‘Resolution’ And Your Chance to Get Yours!

Chosen Line Up | David McCann (Drums & Percussion) | Paul Shields (Vocals/Guitars) – Photo Credit – Fiaz Farrelly
Today's digital age has made metal more accessible than ever as the internet has been a key tool in creating word of mouth between metal fans and their love for the music. Irish extreme metal band CHOSEN recently demonstrated this by offering their debut album 'Resolution' for free download via their official website www.chosen.ie, which has now reached over 5,000 FREE downloads since its release on March 30th.

Drummer / Percussionist David McCann is proud to comment the following:
“We’re simply blown away by overall response to 'Resolution' and could never have predicted this intense level of interest. While 5,000 downloads in just one week may seem relatively small in the grand scheme of things, for a niche band such as ourselves it’s more than we could have ever expected and only reinforces the notion than putting this album up for free download was the right move.”


Produced by Alwyn Walker, 'Resolution' is a reflection of sheer perseverance and innovation, brimming with top-notch musicianship, well-crafted arrangements and inventive hooks. Merged with a rich audio production value, void of the sterile, homogeneous and plastic instrumentation factor, which currently dominates the commercial metal market, this debut album from one of Ireland’s noteworthy metal bands is a truly refreshing piece of work.

The Deluxe Special Edition is a double CD that features a 9-track bonus disc of unreleased songs, rough mixes, drum and bass tracks taken from their album sessions along with a detailed album booklet.
The Collector’s Edition is a spawn of the Deluxe Special Edition that includes a beautiful 60-page, full colour soft cover booklet, extensive liner notes, lyrical themes and illustrations for each song, rare photos, studio diaries and more, all exhibited within an exquisite tapestry of expanded album artwork courtesy of Fiaz Farrelly making it a must have item for those who want something a little more tangible to add to their music collection.

For more info on CHOSEN, please visit these links:

"Crossing the groove of Meshuggah with overt Death and Nevermore influences, their demos to date have been nothing short of impressive.” [Terrorizer Magazine]

“A band that has worked hard and under unusual discipline to produce what very few other bands in the country would be capable of.” [Metal Ireland Webzine]

“Chosen are an Irish two piece of huge technical ability, whose individual sound invokes memories of latter day Death, Atheist and perhaps the dark, swirling intensity of Nevermore. They already have a string of demos and EPs to their name but this is their first attempt at a full length album – and it’s stunningly accomplished. The band are capable of creating moments of sheer class and pretty much every track here is in possession of such. The crisp, incisive sound allows for full appreciation of the intricate riffing and you can’t help but be impressed by the sheer quality on display. CK 4″ [Zero Tolerance Mag]

“Resolution f**king rocks! That is all that needs to be said on the music sense. Perhaps acknowledgement should be paid to the Irish duo that created it, but we’ll assume they get that from the praise the album is receiving here. It’s a fine compendium of riffs, drums, guttural vocals, mixed to a sweet perfection of momentous ear bashing. The production is very well executed and the mix sees the layering of instruments to give a nice wall of sound. If I were to equate this band to anyone or another album it would be Paradise Lost and in particular, their Draconian Times album. How’s that for specifics and I f**king love that album, but Chosen have a more modern sound about them, a polished edge in the metal world that is both heavier and more technical than the Paradise Lost album, but gives you an idea.

In summary then; it’s Irish, it’s heavy and it’s metal and you need nothing more to sit back and have the grey matter dusted off with some chunky riffs and eloquent metal mastery.” [RocknReelReviews]

“Maybe I’m fucking crazy, which I’m sure a ton of you think I am for saying this, but based on this one song I’m guessing that Chosen is what everyone wishes Gojira could be. The Meshuggah / Gojira sound… but with individuality and songs.” [SkullsnBones]

“the explosion of technicality and skill rained down on me like a grand piano in an old silent film.” [MetalStorm]

“‘It’s innovative, with a high standard of musicianship throughout and with tracks which are well- crafted and inventive in their composition. The sound is rich, multi layered, and at times crushingly heavy using a broad range of elements from the full spectrum of extreme metal. The vocals, both harsh and clean, are excellent, which is something I am always highly critical about. The resulting album I found to be a truly refreshing and inspiring piece of work.” [Metal Talk]

“”Resolution” is an artistically successful, and quite original, opus of progressively oriented and sophisticated extreme metal which combines the progressiveness of the likes of Death, Atheist, and Opeth with the crushing grooves of Meshuggah into a riff-driven metallic onslaught which offers both fuel for your fire and food for your thoughts.” [Metal Music Archives]

“The album kicks off with such a rich and clear production that I immediately sat up and took notice before the guy even started singing. This is the kind of production I always hope for when I put on a new album. I bow down in appreciation before whoever engineered this album…This is not your typical melodic death metal album. The album is built on a foundation of melodic death metal, but at the very least one has to acknowledge a bit of progressive as well. I’m not going to speculate any further than that, you will just have to hear the album to understand how much more than “melodic death metal” this album is…All this wonderfully lush and full sounding music was created by just two guys; Paul Shields handles the vocals and guitars, while David McCann does the drums and percussion. I cannot overstate how impressed I am with “Resolution.” This is a top-notch metal release that damn well better get heaps of praise from the metal press this year. Anything less would be an embarrassment to metal reviewers the world over.” [Metal Disciple]

“If I had to put a label on the music, I’d say it was progressive death metal, a weird bastard child born of Messhugah, Tool and Opeth. And only a bastard because with this quality of composition, those three well-established titans should be nervously looking in their rear view mirror. The quality of the music is great, the production is top-notch, and the price: $0. When this comes out, if you don’t check it out you’ll be missing out on one of the best releases of the year. Even if it was $50.” 4.5/5 [Goetia Metal]

“These guys know how to knock the shit out of a song; they do it with skill, originality, aggression, and undeniable talent.” [Scene Point Blank]

“Get the word out. Chosen is one of the best bands you’re likely to hear this year and they deserve it.” [Scene Point Blank]
“In short, this is material that deserves attention from any metal fan on the planet.” [Metal Revolution] 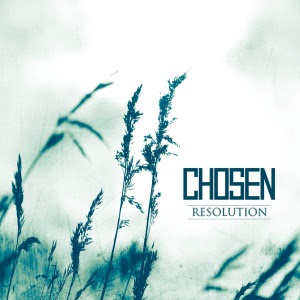 Fusing elements of extreme metal with crushing heaviness, CHOSEN is a band fully intent on taking their multi-layered music to a wider metal audience. Since the group’s inception at the start of 2005, the Irish duo of Paul Shields (vocals/guitars) and David McCann (drums/percussion) have gradually made a name for themselves within various pockets of the metal community, gaining much recognition and appreciation for their solid musicianship and distinctive song writing.

To date, they’ve released a number of independent and well-received EPs, relocated from Ireland to Vancouver, Canada for a year and back again, and are now ready to unleash their much-anticipated debut album, Resolution, upon the world. Recorded at the prestigious Westland Studios in Dublin with producer extraordinaire Alwyn Walker at the helm, Resolution is a reflection of sheer perseverance and innovation, brimming with top-notch musicianship, well-crafted arrangements and inventive hooks. Merged with a rich audio production value, void of the sterile, homogeneous and plastic instrumentation factor which currently dominates the commercial metal market, this debut album from one of Ireland’s noteworthy metal bands is a truly refreshing piece of work.

Posted by The Ripple Effect at 2:00 PM