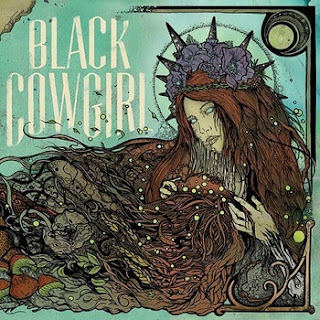 Even when you have seen a band live and witnessed their greatness on stage, to hear that same greatness transfered to a studio album is truly mesmerizing. Black Cowgirl from Lancaster, PA has been around since 2008 laying venues to waste while converting the masses, although it took them until the latter half of 2012 to release their self-titled debut. As amazingly fantastic this album is it was well worth the long wait because Black Cowgirl is a corker!

Fronted by Ben McGuire Black Cowgirl has a fantastic singer and guitarist at their disposal. His voice is soulful, soothing, powerful, desperate, haunting and absolutely beautiful. At the same time his guitar playing follows suit. Whatever direction his voice takes so does his guitar. Of course, one person alone doesn't make a whole band and his partnership with guitarist Nathan Rosenzweig is impeccable. And with such a formidable rhythm section of Mark Hanna - drums - and Chris Casse - bass guitar - the band can't simply do anything wrong.

Drinking from a diverse well of influences they mix Captain Beyond, The Allman Brothers, Thin Lizzy, Neil Young, sludge, groove and doom and the outcome is a totally unique and great sound. I just love it when you can hear a band's inspirations so well blended together with their own style creating something new...and that's how music evolves. Not by rehashing the same old thing. That's not a problem for Black Cowgirl at all who are forerunners in making new sounds. Awesome!.....have I said that before?

For the most part the songs are in mid-tempo which really suits Ben's soulful side but by the flick of a switch they go balls out rocking like a pitbull on a rampage. And sometimes they experiment with tunes like Dead Horse which moves between super-heavy and free-form jazz and Eclipsor which weaves in and out between delicate parts and bone crushing heaviness. Most of all, what intrigues me the most is the rare ability Black Cowgirl has to fuse different styles so elegantly and with such ease, creating a constant flux of greatness. And there isn't a single dull moment on the album, every single second plays an integral part which further enhances the band's enormous talents.

As with any great album there are no bad tracks, however there are two stand-out tracks that epitomizes Black Cowgirl down to the tee and those are Roadmaster and Alkaline. All I have said about them in this review is found in these two excellent tracks. The dual guitar attack is akin to Thin Lizzy's mighty twin attack, it has the spacey trippiness of Captain Beyond and the groove of Allman Brothers. Can't get any better than this waveriders!

Not resting on their laurels Black Cowgirl are in the writing stages of their sophmore album. While waiting for that one to be completed Black Cowgirl will finally get a nationwide release via Restricted Release on May 14. This version contains an extra song, a cover of Rory Gallagher's I'm Not Awake Yet so get a copy as soon as it's available. But why not get in touch with the band and get the fantastic original version while it is still available...you won't be disappointed!