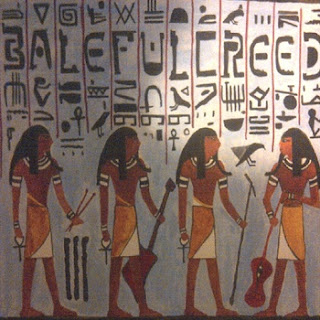 That's a question I ask myself over and over as their third EP, III, decimates my speakers.  And the only answer I can come up with is . . . they will be.

After rocking a strong showing in the TBFM Battle of the Bands contest, narrowing placing second place to Hangfire (after a brutally close voting) Baleful Creed look posed to really start making some noise and getting folks to start talking.

Listening to III, the Northern Irish hard rockers latest EP, one thing that comes across loud and clear ; these cats are for real.  5 songs tucked into about 25 minutes of blistering, venom-infused hard rock.  A bluesy bluster is there, but so is some serious post-Kyuss riffing, some aggressive post-Soundgarden rock muscle, and a melodic sense shared with their countrymen, Trucker Diablo.  Heavy and hard, yet each song settles nicely into the ears, gets the toes tapping as much as the head banging and leaves a melodic aftertaste that keeps me coming back for more.

"Double F.S." kicks us off with a muted, post-grunge intro riff that builds nicely to the face-smash of guitar/bass and drums 22 seconds in that lets us know these guys mean business.  Drop in a stuttering riff that really takes off at around the 50 second mark and I'm in hard rock heaven.  Baleful Creed keeps the vocals real also, gritty and gruff, yet clean--not gargled amongst a bottle of lye.  That's the way I like my vocal attack.  "Double FS." keeps the energy going with a vague ZZ feeling, or even (dare I say) a slightly swaggerish Mothership vibe.  Something bluesy and near-Texan in the sway of that groove.  Great stuff.

The rest of the EP doesn't let up from there.  "Autumn Leaves" brings on the grungy attack big time.  Singer Fin Finlay continues to stand out from typical growlers out there with his range and spite in his chords.  Meanwhile, Guitarist John Allen lays down the changing riffs or spews out a fiery solo effortlessly, while drummer Mark Stewart and bassist Stephen Fleming keep it all locked together perfectly.  Just simply tight, double-fisted, quality rock n roll.

If you're a fan of aggressive heavy rock with a melodic backdrop but still with enough muscle to tear apart a crowded bar, then you really owe it to yourself to check Baleful Creed out.  They have three EP's now, each a touch different from each other, but I think III best represents where the band is headed.

I keep begging John to release some vinyl.  In the meantime, you can get the EP's at their Bandcamp page.