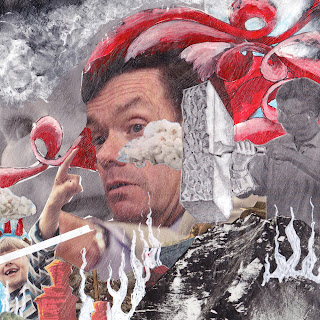 I’ve said time and time again, I’m not a Doom fan. Not in the traditional sense, that is. I like the heavy riffs, I like the plodding grooves, and I like the imagery of destruction and the hopefulness masked in hopelessness. I like the psychedelic fancy and the manic tension. On paper, I should be a freak for Doom Metal. The problem is, too many bands do their Doom thing in a very one dimensional fashion, or it’s just that they don’t do it well, and I find it as boring as a church service lead by monotone priest. Give me some vocal inflection to drive home the fact that my soul is going to live on in the afterlife, tormented by the tasty little succubae of the Netherworld.

Well, I’m not sure what church the Stone Machine Electric guys go to service in, but they’ve got their own message and it’s rife with intrigue and overflowing with dread and fear. The music of their 5 song debut disc is the heaviest stuff I’ve come across since Wo Fat’s The Black Code left a crater in my soul. Hey! Would you look at this! Kent Stump recorded and produced this album . . . that’s one explanation for the heaviness, the other being that the recording duo of Dub and Kitchens are actually this heavy as a two-piece in the live arena. Having witnessed their tyranny to the senses awhile back, I know firsthand that these guys bring sonic destruction to everything in their path. The addition of Stump twisting and turning knobs was an act of brilliance coz’ this dude captured the band perfectly, and then enhanced it for the audiophile in all of us.

Brutally heavy, and I mean HEAVY, Stone Machine Electric create a wall of sound, but they do it in that just-so elegant manner that makes the listener understand that there’s substance to the weight. The song craft is top notch in that you’re never quite sure where these guys are going to take the music, leaving us certain that the music is gonna go careening over a cliff and end up a nasty wreak, but nay . . . the band just like the thrill ride that we’re all on. And, while the time changes are complex and some of the compositions have a herky-jerky motion going on, it still feels natural and organic. Hence, the compelling nature of this album . . . always something new to hear and it never, ever becomes boring or dull.

“Mushroom Cloud”, “Hypocrite Christ”, “Carve” . . . all of the songs have this amazing musical quality to them. Each tune has that aforementioned heaviness, but mixed within all that riffage and diabolical dread, Stone Machine Electric mix in these fantastic washes of psychedelia, and wildly dangerous and abrasive moments of blues rock. It’s absolutely killer to listen to, whether completely sober, or (maybe more appropriately) lit to a mind expanding state. The layers of the guitar are so deep and the tonal qualities so rich (I have to think this is due in large part to Kent Stump’s engineering talents), the way one channel is picking up cleaner tones, while another is littered with landmines of distortion and sonic turbulence. Best example of all of this is on “No/W/Here”. Positively brilliant tune!

You’re never gonna hear Stone Machine Electric on terrestrial radio, nor should you. A part of me wants to keep them the undergrounds best kept secret, another part of me wants to see them succeed beyond all reality (coz’ seeing these guys in tuxedos while accepting an award would be priceless). Much like Wo Fat, who have begun redefining the word “heavy” and who have applied that heaviness to blues-based freestyle rock, Stone Machine Electric is using the blues as a basis and going free form, and taking the music in their own direction. Don’t listen to this and think Sabbath, though there’s certainly an influence in there. This is their own thing and I, for one, think it’s fucking beautiful.