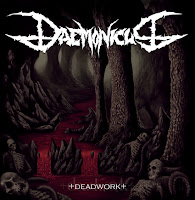 Old style death metal from Sweden and although Daemonicus aren't reinventing the wheel Deadwork is excellent fast, furious death that puts so-called modern-day death metal to shame. This is how it should be!
Throughout Deadwork the band never lets off speed keeping the pedal to the metal which could have made the album boring. But the skillful musicianship and a great knack for changing things up at the right moment keeps it fresh and vibrant.

Another thing that makes me like the album is the sound and feel of the mighty The Crown, especially singer Stefan Hagström who resembles Johan Lindstrand a lot but with a raspier voice. Also the song structure is akin to their Swedish counterpart and I just love it. 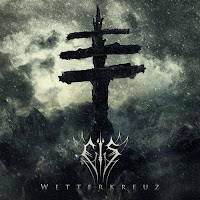 
Cold, unforgiving and fucking brutal black metal from Germany. And with the name Eïs, iron in English, they should be this way. In between songs there are interludes of snowstorms and gale force winds that perfectly enhances the atmosphere the band is aiming for.

This two-piece are no slouches and create excellently what they have their minds set on making Wetterkreuz as good as it is. The harshness in their songs becomes even more apparent because of the language. They sing soley in German except for the Sun Of The Sleepless-cover, Thou, Whose Face Hath Felt The Winter's Wind, which is sung in English. And that only works to their advantage because to me black metal sounds more evil than in Norwegian as I assume most puricists prefer.

Bring on the snow and cold so I can brave the weather gods and clear my head from negative thoughts cause Wetterkreuz, like most other brutal, evil music I like, works as a catharsis for me. Fantastisch! 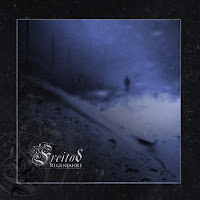 
This is another two-piece black metal band from Germany who has a different take on the genre. The two members G.Eisenlauer - guitars & bass -  and R.Seyferth - drums -  share the vocals utilizing black metal singing(Seyferth) and clean singing(Eisenlauer)which usually makes me cringe, regardless what music it is. But for some reason it works fine on Regenjahre. Perhaps it has to do with the main topics...namely death, depression and suicide. After all, Freitod is a German word for suicide.

What also makes them stand out for me is that even though this is black metal they are not afraid switch tempos and slow down before kicking into gear again which pushes their lyrical themes to the front. What I mean is the emotions a depressed, suicidal person goes through is perfectly portrayed here because of the musical changes.

Since Freitod are singing in German and my knowledge of that language is very limited I can't follow their lyrics that much although I get the gist of it. However, the band is so talented that they use their music just as much as the lyrics to relay their themes to us non-Germans and it works wonders.
Check them out if you want a totally different kind of black metal...es ist sehr gut! 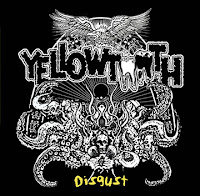 
This is filthy, nasty and dirty stuff with a production to match. At first I actually thought the production sucked real bad but the more I listen to Disgust the more it begins to work juxaposted with the slime and grime.
What this sludgy Michigan City, IN, trio bring to the table is a cool mix of Motörhead, punk and a don't-fuck-with-me attitude with some doom thrown in for good measure. Mixed together the outcome is pretty good albeit nothing new. That doesn't matter though since Yellowtooth are honest and straight-forward in their approach and they seemed to have a damn good time recording the album. And that counts for a lot too. They play to their abilities, enjoy themselves while doing it and that kicks ass and I value that higher than technical brilliance with no soul or feeling. And even though Yellowtooth's music is dirty and filthy they have a lot of feeling and soul.

If your party is slower than a snail on speed Disgust is an album that will kickstart things and even get zombies to groove in their quest for some fresh intoxicated brains. 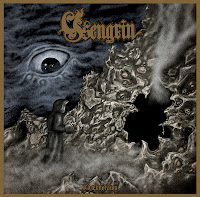 
To Endotaton is the French black metal trio Ysengrin's third full-length, the first for the fledgling label I, Voidhanger, and it is a monster of an album. It consists of only one track, To Endotaton, which clocks in at just over 40 minutes. Despite the long play time for only one track, there is never a dull moment on here thanks to the excellent musicianship and songwriting skills of the band.
This is the first time I have heard of Ysengrin and they do leave me wanting for more mainly because of the aforementioned traits above but also because they step outside the box and try to experiment a little bit which works wonders for them. And that has to do mainly with not over-doing it which isn't a problem for these Frenchmen at all. To me it seems they have a healthy dose of a less-is-more approach which is good when you want to expand your musical boundaries.
Ysengrin is a nice surprise that I will definitely explore more and I urge you to do that same. Of course I only know what To Endotaton sounds like and I do recommend it greatly. However, go on further and listen to their previous efforts as well. They truly deserve more recognition.

Actually "Eïs" is the German word for ice. I knew that because I'm a beer geek and "eisbock" is a style of beer that involves freezing off some of the water. That being said I enjoyed all the mini reviews and am checking out Yellowtooth on Bandcamp as I write this.

You are absolutely right! Don't know what I was thinking and my apologies for this. Glad you liked the mini reviews though.