Patrick DeCoste - Show Me The Way To Go Home 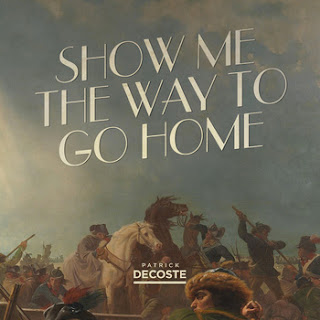 Patrick DeCoste promotes himself as an "Instrumentalist Rock Guitarist," yet, that is an ill-fitting phrase for what DeCoste does on his second full-length CD, Show Me The Way To Go Home.  Even the casual listener will discover that DeCoste is an exacting left-handed fret-shredder.  The lack of any vocals in his music focuses attention on his fingers.

What does DeCoste do better than most?  Two words - Guitar Tone.  He has mastered the tones of others and adds his own.  Here are the influences I hear:

Track
1. "Perfect People":  I got the feeling DeCoste sat down with Eric Johnson and they decided to trade licks.

3. "Dirty South":  The Edge takes a vacation with Jerry Garcia to Mussel Shoals.

6. "Slan Abhaile":   An acoustic percussion guitar piece with the nuance of an Andy McKee.

8. "The Throwback": DeCoste watched too many TV re-runs as he channels Ben Moody, the guitarist for Barry Manilow's recording of the theme from the 1970's series "Love Boat," and tosses about a few Earl Klugh-like licks.

9. "Not In Vain":  DeCoste brings on his Eric Johnson and Joe Satriani tones.

11. "Mark Twain":  Hello, Jason Mraz?  Patrick DeCoste wants to play with you and here he does.

12. "Show Me The Way To Go Home":  This is a short acoustic guitar outro of just a few seconds and could be mistaken for the beginning of an unfinished work.

I really don't think Show Me The Way To Go Home will find a mass market.  It is a display piece that seemingly is meant to astound band leaders and producers to attract work for a very, very good guitarist.   In an intervew with Will Caron at late night (http://www.latenightboston.com/louder-music/item/23-guitarist-patrick-decoste-on-his-new-album-show-me-the-way-to-go-home.html) DeCoste was asked with which artists that are still alive would he like to work, and he responded:

For me, I consider playing for David Lee Roth or Ozzy to be the ultimate accomplishment for a guitarist. Being a part of a late night show band is another “best of the best” playing situation or being a studio session guy like Steve Lukather and Carl Verheyen. If Steve Perry, Jason Mraz, Kelly Clarkson and Paul McCartney called, I’d love the chance to play or collaborate with them.
Let me suggest that Show Me The Way To Go Home is Patrick DeCoste's business card. David, Ozzy, Paul, Steve, Carl, Jason, Kelly, are you listening?  You might want to give Patrick a call.