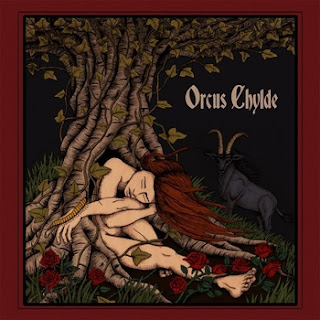 The magic mushroom glowed in purple and red hues.  Iridescent circles and geometric designs dotted it's earthy body like a bespectacled jewel.  The shade of the weeping willow tree protected me from the afternoon sun, as I sat near it's stubby roots under it's graceful canopy.  The river flowed by like gleaming diamonds.

The world opened up beneath me and swallowed me whole, as I fell, gently into the magical world of Orcus Chylde.

Many bands come out brandishing a retro-70's banner, waving it high and proud and beating their chests as they declare their "heavy psych" roots.  Few do it as effortlessly as Orcus Chylde.  Fusing the warmth of that very 70's organ with a decidedly pre-digital tone to their guitars, Orcus Chylde have nailed the timelessness of that lost era of proto-metal psych.  So much so that when this album first popped into my playlist, I had to double check that it was indeed a new release and not a lost classic from a bygone era.

Each song here is an epic of muted protometallic heaviness.  Proggy in nature, psychedelic in heart, jazzy in its freedom, Orcus Chylde take their time in releasing their tales of lost worlds and universes.  Each song clocks in at a minimum of 6 minutes, with the exception of the 5 minute sliver of acoustic grace and beauty that is "As Time Will Bury Us."   And Orcus Chylde know what to do with that time.  They don't simply stretch out the riff, burying it in extended monotony.  Each song is given ample room to breathe and reach and grow. They explore like the roots of our willow tree, digging through the soil towards the heart of the earth.

"The Day the 7th Angel Came" begins with a simmering burst of organ and bass that screams for lava lamp and black light accompaniment.   Guitars here are texture, mood setters, as the organ and bass guide us into the swirling world of Orcus Chlyde; a world forged by the Gods in an age pre-punk revolution.  A sequestered world that has never been tainted by the scourge that was hair metal.  It's a world of bluesy psychedelia and organic protometal heaviness.   Riffs come and go and blur and dance and fade with a seamless jammy exploration, but never become lost or wavering.  It's no trick to keep the feeling of unlimited jamming exploration while keeping things confined to a driving song structure.  But Orcus Chylde do it effortlessly.
Vocals are otherworldly in tone with a nasal disassociated quality as if they don't come from an individual, so much as they ride on the coming wind.  Guitars are impassioned and set loose to explore their every whim.  The rhythm section keeps it all locked together and then there's that organ.  That perfect organ that really sets it all in place in time.  Within the 6:16 of this song, the band explores more territory and shifting riffs and passages than many cover in an album.

Yet it all hangs together perfectly.

And that's where I'm going to leave this writing.  Orcus Chylde have crafted without a doubt one of my favorite retro-rock albums of 2012.  With all the talk of Witchcraft and Kadavar and Ghost, I find it hard to believe that Orcus Chylde isn't etched onto that list.  Carved into the retro-rock stone of respect in large chiseled letters.  Spoken about In hushed and revered tones and mushrooms and lava lamps and whatever else comes from their mystical world.

An album definitely worth hearing and a vinyl that quickly took it's place in my collection.