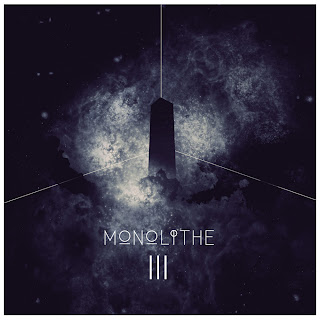 It's always a huge risk releasing a 52 minute single song album but funeral doom/post metal maestros Monolithe from France are clearly not afraid of taking chances. This being their third full-length album I had never heard of them before, so I can't disclose on their development album to album. I can say though that Monolithe III is fucking awesome!

III  is the third chapter in Monolithe's story of mankind and by crosspollinating funeral doom and post metal while performed excellently, the band takes me through a fantastic musical story. As I mentioned earlier III consists of only one song but Monolithe doesn't waste second of it. Therefore there are no filler-parts, every molecule counts and has a distinct part in the story they tell.

To keep the album organic Monolithe stray from their mainly funeral doom foundation by going through tempo changes and different kinds of arrangements. And this is where, to me at least, post metal enters the picture. Puricists might scream blue murder by my mentioning post metal but trust me waveriders it's there and it works fantastically. By adding tempo changes and post metal the band allows III to breathe which in turn keeps a naturally flow to the music. And that's the key point of the album, a kind of richness if you like.

Being a long single track album III is so dynamic, vibrant and elaborate that time flies listening to it. And each listen brings out new angles and twists constantly elevating the album to higher levels. Messieurs Sylvain Bégot - guitars, bass, keyboards, programming; Benoît Blin - guitars, bass guitar; Richard Loudin - vocals and Sébastien Latour - keyboards, orchestration, programming are top grade muscians and are absolutely fearless in what they are doing which has resulted in the classic release that III is. It's unrestrained and free-flowing which usually only happens when a band are sure of themselves with talent to match...that would be Monolithe bien sûr.

Even if I, for some stupid reason, don't step back in time and listen to Monolithe's previous albums, III alone will do it for me. This is a fantastic effort that I rank amongst the best releases of 2012 and I'll be damned if it's not going to be even greater than that! What else is there to say? If you want to be introduced to a new genre in the best possible way III is what you should choose. And if you already like this kind of music it should already be in your record collection!