Monks of Mellonwah - Sky And The Dark Night EP 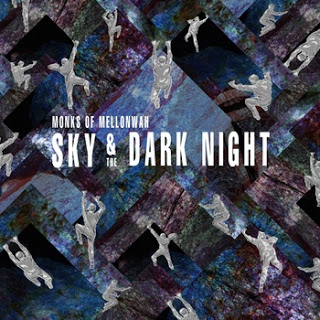 Do you like symphonies?  By that I mean thematic and harmonic organization through exposition of tonal materials that are frequently recapitulated during the course of a work?

The first things that come to most music lovers’ minds when they hear the term are classical works by Beethoven, Mozart, Tchaikovsky and their ilk.  However, symphonies do not need to be orchestrated 18th and 19th Century classical compositional masterpieces.  Rock music has also had its share of symphonies -  Moody Blues' Days Of Future Passed, Jethro Tull's Thick As A Brick, King Crimson's In The Court Of The Crimson King, Genesis’ Selling England By The Pound, Pink Floyd's The Wall, just to name a few.    Monks of Mellonwah, a Sydney, Australia based indie band, provides its rock symphony with the release of Sky And The Dark Night.

The EP is comprised of three parts and there are no breaks between tracks.  Part 1 is "Breakout," part 2 is "Control" and part 3 is "Condition."  The music is created by singer Vikram Kaushik; backing vocalist and guitarist Joe de la Hoyde; bassist John de la Hoyde; and drummer John Baissari. Inspiration for the album, according to Joe de la Hoyde:

"We are each riddled by our own curses and battle our own demons. There are diseases and syndromes, and many things that we can't understand let alone hope to control. Sky And The Dark Night, to me, is the journey from the beginning of our battles to their fruitless ends; the ups and downs, the triumphs and the failures. It is the undying hope that maybe somewhere along the way, we might find  ourselves."

What you hear is not as bleak as Joe paints it.  The eight minute sixteen second trilogy of parts commences with timpani and strings, as if clouds from an ominous storm approach.  Cellos soar to an abrupt end as a subdued guitar takes up the theme and Vikram sings of being lost in pain in another person. The orchestra again slowly joins as the theme builds to a shredder solo by Joe before returning to Vikram's and Joe's vocal harmonies and a heavy guitar, bass, drum movement.  The orchestra rejoins with foreboding cautiousness punctuated, first, by spasms of metal rock guitar and drums, and then, by galloping electronica with barely perceptible human voices caught in the tempest. The EP finally slowly fades to silence.

According to their press release this is Monks of Mellonwah's third EP in the past three years and they are currently in production on a full-length offering.  They have an incredible amount of compositional and musical talent.  In fact, they recently signed a development deal with A&R Worldwide, which also handles Muse, Adele and Coldplay.

Just like symphonic music, Monks of Mellonwah is building up to a grand crescendo.  Grab your headphones and be the first on your block to hear them.

Thanks for taking the time, guys!