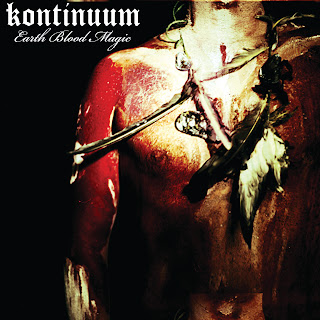 Labelling a band is a "must" amongst music scribes I guess, just to make it easier for us when reviewing albums. Sometimes the labelling is spot on, sometimes it's utterly wrong. As is the case with Iceland's Kontinuum, who according to the press release from their record label are a progressive post black metal band. I can agree with the progressive post metal part but as far as black metal goes, the track Lightbearer is as close as it gets, that's all. Maybe Pornea, the band that morphed into Kontinuum were black metal. I honestly don't know but if this is how the new generation of said genre sounds like greatness abounds.

Enough twiddling around and let's get down to the heart of the matter. I just love it when an album grabs me by the balls and slams me against the wall. Whether it's a known or an unknown band doesn't matter, when my attention is caught like that I'm in heaven. And Earth Blood Magic is such an album.

What's on hand is a bleak soundscape, cold, harsh and dreary synonymous with their Icelandic landscape. Add a big dose of Voivod and Killing Joke into the equation and you have the magic that is Kontinuum. The duo of Birgir Thorgeirsson - vocals, guitars, bass guitar, keyboards, samples and Kristján B. Heiðarsson - drums have created a beast that deserves world recognition and world dominance because their music is far too good to be ignored. And this has every chance of happening since they now have a full line-up. So let's hope for them to tour...a lot!
Endgame launches the album into orbit with a heavy bass line-driven foundation. It's almost as if the bass guitar is the lead instrument on this track and the others are the rhythm section. Largely an instrumental song the only vocal part is a sample of a preacher spreading the disease and it works so well in unison with the track.

Three out of the nine tracks - Steinrunninn skógur; Lýs milda ljós and Í Gljúfradal - are sung in their native tongue adding more to the harsh outlook of Earth Blood Magic but it also adds a mysterious side to the band as well. Maybe it's because I don't understand Icelandic at all, regardless it makes the songs darker in a good way.
Red sees the band slow things down slightly and they bring in Agnes Erna Stefánsdóttir on vocals. This is a great move because the song is a beautiful sad and haunting song about lost love and death.

Earth Blood Magic is a fantastic debut album and I wish more bands could create something as good as this with any of their releases. Though, it will put pressure on Kontinuum when it's time to make their sophmore album because this is a beast. However, the talent that is on display here bodes extremely well for the future and waveriders Earth Blood Magic is a MUST in your collection!