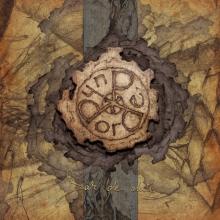 Dordeduh from Romania was born when Hupogrammos and Sol Faur left fellow country-men Negură Bunget. And having listened to Dar De Duh countless times all I can say is they made the right choice by forming Dordeduh. Not that I don't like Negură Bunget, on the contrary, but the guys have created something else here and there is no telling how far they can go.

What these Romanians offer is an amalgamation of black metal, post metal, Romanian folk, transcendentalism and shamanism in equal measures. Of course I don't understand a word they say since they sing in their native tongue. However their instrumentation and performance alone is so fantastic that it puts me in a trance-like state every time I listen to Dar De Duh. And that makes even more sense since the band name apparently means longing for spirit.

Despite their various influences Dar De Duh is a very solid and cohesive release which is clearly emphasized in the band's talent of weaving a fantastic musical tapestry for me utilize to create my own tale due to the language barrier. And the various style employed on the album serves, to me at least, as chapters or stages where Dordeduh's soundtrack sends me out on a great journey of the soul and mind.

Also Dar De Duh is that rare kind of an album where each song is great individually but also as a whole, and that's where the cohesiveness I mentioned earlier comes into play. On many records past and present songs would be great on their own but as part of a whole album they would fail miserably. Dar De Duh is nothing of that sort at all. Dissect it and it's great, keep it untouched and it's fantastic. And that's what I love about Dordeduh, they are not afraid to take wide turns and experiment knowing that they won't fail. To me they seem so confident in everything they do that they are completely unrestrained and at ease which is a great trait. Alas they do whatever they want to and the end-result is bar none earth-shattering.

Whether you're into this kind of music or you are looking for something new that will challenge your musical boundaries look no further waveriders. Dordeduh is that special band that can and will take you on a head trip you have never experienced before. Just sit back, clear your head and allow these Romanian maestros to spellbind you....and spellbind they will. This is awsome stuff!