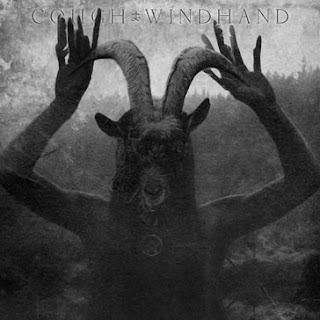 Cough has one song here, at 18:31 (as is their wont) called "Athame," while Windhand follow up with two tunes, "Amaranth," and "Shepherd's Crook," at nearly the same total running time.

Let me cut to the mother-fornicating chase:

Neither of these bands moves one bit beyond what they've done before-- but both return, and return with a vengeance-- to their Places of True Peace and Knowledge and Confidence-- their "wheelhouses," if you will.

If you like either band, you will love what happens here.

That's the best way to sound byte these two bands' performances-- should've just used that that as a lede, I guess.

Now, I don't know if the title references some ironic, post- post-modern metal take on Jung's "shadow self" concept (I'll just assume it does), but I am digging this bad boy.

This just made my day. If the band names Cough and/or Windhand mean anything to you, you may garner the same experience.