Celtic Pride - Light Up The Sky 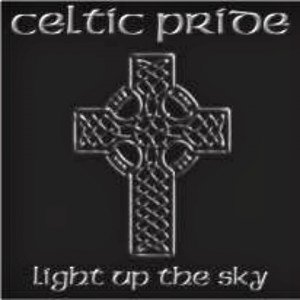 Until I was nine years old I lived on the East Coast.  My family home was in northern New Jersey within daily commuting distance to New York City.  Consequently, I was a big New York sports fan. This led to a serious misunderstanding of the term "Celtic."

My first acquaintance with the term came from watching the futility of the mid-1960's Knicks as they played against a Boston basketball team that was on its way to eleven championships in thirteen years.  I thought the term started with a soft "c"  and presumed it had something to do with the color green, leprechauns, four leaf clovers and a bald man named "Red" that smoked cigars.  Little did I then know that it referred to the pre-Christian peoples of Northwest Europe and was actually pronounced with a hard "c."

So how did singer Justin Matthews, left-handed lead guitarist Doug Williams, rhythm guitarist Rob Williams, bass guitarist Dominic Hill and drummer Bob Richards come up with the name "Celtic Pride" for one of the best known cover bands in all of Wales, U.K.?  I have no idea.  Maybe it is because of infighting among the band members.  Tribal warfare was a regular event in Celtic society.  The Celts were known for fighting as if they were wild beasts.  Maybe it is a reflection of the fierce metal-tinged classic rock assault the band supplies through its own tunes.  Like the Celts, Celtic Pride delivers a frenzied onslaught as ferocious as Celtic headhunters.  Or could it be that they just liked the 1996 Damon Wayans and Dan Aykroyd comedy of the same name since that is the year the band was founded? I simply don't know.

What I do know is on their new album full of original music, Light Up The Sky, the band delivers fierce hard rock.  The style is Rush-Scorpions-a-licious.  It is bass heavy, laden with tasty guitar hooks, pounded out in fantastic fashion, and all of it fronted by Matthews' scintillating lead vocals.  Matthews easily slides from booming rockers to heavy ballads. But, I really can't say enough about Bob Richards' drums - they are epic and form the foundation for this incredibly tight band.

His beats on the track "Don't Cry" will have you on the edge of your seat.  Others, like "Gonna Get You," will stir memories of Humble Pie and Rare Earth.  He is the band's Bill Russell.

The album is an absolute gem.  It even includes an appearance by Iron Maiden guitarist and backing vocalist Adrian Smith on the track "The Patriot" (maybe the album is about Boston?)   If you are a fan of proto-metal hard rock of the late 80's and early 90's you will love this album.  The band has got game and the album is a slam dunk.  Celtic Pride has got Ceol.