One of the main things that initially fueled the creation of this beast we've all come to know and love as The Ripple Effect, was Pope's and my obsessive penchant for digging through bargain bins, spelunking for lost treasures. To be fair, not every item unearthed was a gem.  Or even a piece of fool's gold.  We've turned up a few stinkers.  But that's part of the fun.  Spend a buck, take a chance, discover or jewel or use it as a skeet shooting target.  "Pull!"

I've been writing recently about some of the Bargain Bin Treasures.  But as I dig through the piles of vinyl I've bought, not every album makes the cut.  So I invite you to plow through the mass of records with me, and we'll decide what stays and what goes.

With that in mind, here's some of the "not so treasured" albums I've mined out of the bin, dropped a dollar, and searched for a reason to keep it in my collection.   Some of you may be really into these bands, this might be your all-time favorite album.  So this may stimulate some conversation.  Flame me if you want, disagree and tell me why I need to give it another listen.

All I'm writing is what I hear as the vinyl spins.

And what makes me cringe. 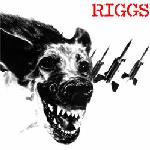 I was stoked to find this album for a buck.  I remember Riggs vaguely from back in the day.  I know that lead guitarist/singer Jerry Riggs has a nice resume with a long stint with Pat Travers.  And I remember digging their two song contribution to the Heavy Metal Soundtrack.

Toss in a rabid dog on the cover and all should be good.

But it's not.  Generic early '80's rock is the name here, swallowed by a thick production that smoothed any rough edge the band may have had.  The album doesn't rock hard enough on the rockers and the ballads are bland.  Not enough hooks or memorable songs anywhere.  Even their "biggest song" "Ready or Not" just sounds flat and typical to me.  Nothing to make it leap off the vinyl and drill it's way into my brain.  I keep getting the feeling that Riggs really just wants to bust out, but can't, and we're all the less because of it. 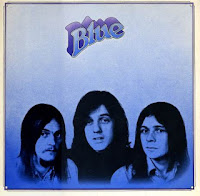 Come on, you have to agree, it looks good.  A trio of 70's long-haired dudes.  One hairy, one looking really stoned.  They look like they rock and rock hard.  A power trio I'd never heard of?   Some raging blues rock in the Cream vein?

Blue is very soft, 70's AM rock/pop that simply never bothers to awaken from their anonymous slumber  The second track, "Look Around," gave me false hope.  A nice mid-tempo "rocker" with an attempt at at meaty guitar, but it really was a mirage.  Mainly, what we have is rather boring soft, sameness.  Now I got nothing against 70's soft rock.  I dig America.  I'll listen to Seals and Crofts and Bread.  I'll even tip my hat to some of the cheekiness of The Carpenters.  But Blue is Beatles-inspired blandness without the hooks, or melodies or catchiness of the best of 70's soft pop.   All with a bit of an incongruent country-rock vibe considering they came from Scotland.

At some point you have to wonder when "Beatles-inspired" rock simply becomes "Beatles-copying".  Without the talent of the Beatles.  Snore . . . . . 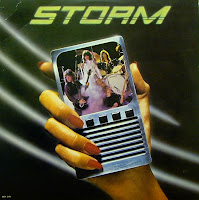 I remembered this album from back in the day and remembered not liking it then.  But there I was (in one of my more surreal moments) record shopping with Mike Varney.  Yes, THE Mike Varney of Shrapnel Records. He who's worked with Michael Schenker and Yngwie and basically created a whole genre of metal.   And he's grabbing CD's and tossing them at me at a furious rate of all these bands I'd never heard of. Then he pulls out Storm and jams it into his own basket with a greedy smile.  "Have you heard these guys?  They're amazing!"  Mike is a musical genius and an encyclopedia of music knowledge, so seeing him that excited . . . well, that's enough to light my fire.  I scoured discount bins for almost a year to turn up a vinyl copy, and finally did in Sacramento for $1.99.

And "amazing"it is, but not in the right ways for me.  Looking at the cover, I'm expecting some sort of pomp-version of Heart or Pat Benetar, which woulda been cool.  But what I got is some sort of incredibly messy, new-wave-inspired version of the Runaways, or a pomp Kate Bush ramrodded through a Queen filter.   Maybe Missing Persons living on old Sweet Records?

I don't know, but it's kinda a mess.  It's got some punk chops and lots of attitude, but none of the songs hang together at all.  It sounds like they went into a practice room and said, "let's do a song called "Games Over" and all proceeded to play whatever each musician felt that that song should sound like without ever bothering to hear what the other guys were playing.  Guitars come and go at weird times, with no hooks, barely any structure or even a recognizable chorus.  But most of all, Jeanette Chase's vocals just don't do it for me, hanging out way in the whiny, screeching end of my audible spectrum.  Somewhere between nails on a chalkboard and two pieces of rubbing Styrofoam.

I've read that this album was released to "huge critical acclaim"  and that many today consider it a cult classic.  Even a great one.

I simply don't hear it.

This is a great idea for a column! Once again, you've inspired me.