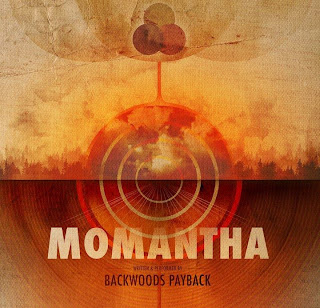 This West Chester, PA doomy stoner, heavy desert rock four piece are the real damn deal, there's no other way around it. The nucleus of the band has for a long time been Mike Cummings - vocals, guitars; Jessica Baker - bass guitar and Rylan Caspar - guitar and they have created something enormous with Backwoods Payback through years of non-stop touring nationwide and through fantastic musicianship and song-writing talent.

Momantha is their third full-length release but the first for Small Stone having been strictly DIY up until this point. They are still pretty much DIY when it comes to touring and promoting themselves and I am not lying when I say that they are one of the most hardest working, honest and nicest band out there. Did I say that their music is fantastic? 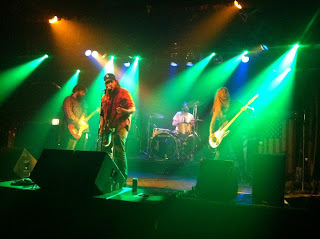 This album starts off in true Backwoods Payback fashion with the riff avalanche that is You Know How This Works. After a short slow start the song kicks in and leaves me floored. Mike's haunting, desperate voice adds so much depth to their vision and version of stoner rock. The lyrics, to all their songs, are very deep, emotional and sometimes brooding on the one hand and very much tongue-in-cheek and humorous on the other which works perfectly together since they deal a lot about daily struggles. And to me that's the genius of this band. They really do speak directly to me, they are singing about my hardships in life but in a way that is so uplifting.

All throughout Momantha, from opener You Know How This Works to closer Ballad Of A Broken Horse, I'm treated to riff-laden heavy fuzz displayed at a mid-tempo level which splits my skull in half. Still Timegrinder and the aforementioned Ballad Of A Broken Horse are piledriving rockers laced with a punkish attitude while Velcro is eery, slow and haunting and so sad and depressing in all it's excellence. Knock Wood takes a detour through a psychedelic space trip and I'm glad to be onboard for it. And I better not forget Mr.Snowflake where they mix the mid-tempo riffing heaviness with skullcrushing brutality...fucking awesome! Don't forget to check the official video for this song below, it's one of the best I have ever seen waveriders.

Backwoods Payback are that kind of band that can transfer their live brilliance on to an album which is a huge accomplishment. A lot of times excellent live bands gets lost in translation when recording an album. For these guys that's not a problem mainly for two reasons with the first being their musical talents. They are top notch at their respective instruments. Jessica is a beast on the bass. Her sound is so full and to the point allowing Mike and Rylan to excel in trading chops, licks, riffs without losing tempos or keys. Now-departed drummer Steve Curtiss is doing more than fine behind the kit.

The second reason is that they give their all every time, whether it's on stage or in the studio and you can tell when listening to Momantha. It sounds like it was recorded live in one take, that they are tearing the studio apart bit by bit just as they do at shows. And that's the signum of Backwoods Payback, they give their all every time even though it means playing to 10 people in San Francisco or a packed East End Cafe in Newark, DE.

Get yourself a copy of Momantha and their self-titled second album if you can find it. The band might still have some copies left and join the Backwoods Church of Payback.  You will love them I guarantee that and the band deserves it. This is the real deal as I mentioned in the beginning and if you join their congregation you have seen the light and joined the proper "religion" because Backwoods Payback are what music is all about. Enough said!

It's actually the third! I did it first!

Damn the third? I knew you did the first one and as I thought the only one prior to mine.

Hedbuzz did one, too! The more the better. This is a great album.