Wiht - The Harrowing of the North 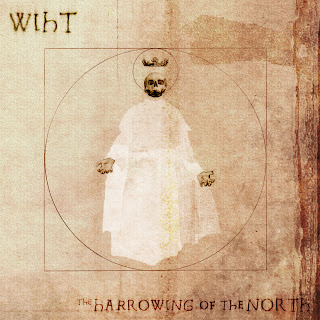 As I've mentioned before, I have been seriously derelict in my duties when it comes to listening to new music. It's a new year and time to remedy the situation. One of my favorite things to do when I have a ton of new stuff sitting around in my in box is to pick something at random and let it play while I navigate the brutal job market in search of work. So today I closed my eyes, moved the mouse around and it landed on Wiht's "The Harrowing of the North."

Turns out this is a good soundtrack for scrolling through endless job listings on indeed.com. Wiht are a heavy trio from Leeds, UK specializing in space ritual style instrumentals. Actually, I should say "were." According to their bio the split up about a year ago but are releasing their final recordings, two long ass jams that clock in at around half an hour. "The Harrowing of The North" and, also according to the bio, "contains 8 movements which follow the raids from their beginnings in 1069- when the King massacred Yorkshire’s people and destroyed the land ensuring it held no economic or cultural worth and remained subservient under his rule- to his remorseful deathbed nearly 20 years later." Dude! That's heavy! Musically it's very heavy. Parts sound like something off the first album by The Sword and others remind me of Ufomammut. So if you're into a Black Sabbath meets Pink Floyd thing, that's good news for you. The other song is called "Orderic Vitalis" and is dedicated to an outspoken chronicler "who, though loyal to his king, was outraged at his cruelty and condemned him in his writings." BRO))))! Musically, it continues in search of space.

It's too bad these guys broke up but I'm glad they are releasing these jams, and they certainly helped pass the time during a frustrating afternoon. With played their last show in March 2012 at Desertfest with heavy hitters like Corrosion of Conformity, Orange Goblin, Ancestors and Black Cobra. Not a bad exit strategy.