Venomous Maximus - Beg Upon the Light 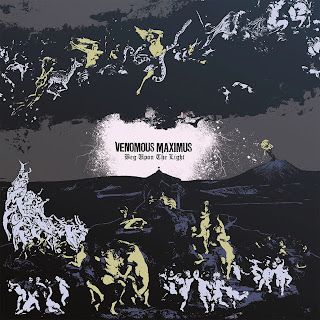 Two days in Dallas/Ft. Worth.   Seven bands over two shows for the Mothership album release parties.

And I'll say again, what I said after the First Annual Metroplex Heavyfest.  There's something in the water down here.  Some darkened mushroom growing in the muck at the bottom of the reservoirs.  Some unknown mutagen leaking into the piping system.  Something that ferments within the DNA of the locals, leading to the spawning of a mind-boggling number of fantastic heavy bands that spew forth an incalculable number of heavy styles of rock.

But it's not just Dallas.

Venomous Maximus's latest long-player, Beg Upon the Light, has arisen from the same primordial rock stew to remind me that the entire state of Texas is likewise infected with this mutated, rock-god spawning, spore.  Toss in Project Armageddon and Sanctus Bellum and I'm sure many others, and the Houston scene seems to be every bit as explosive as what's happening in DFW.

I loved the Venomous Maximus EP that I reviewed last year.  Simply an assault of brutality seemingly concocted purely with the intent of bludgeoning my consciousness into submission. And it succeeded.  So it goes without saying, that I was hungering for my next full-frontal lobe beating.  And again, Venomous Maximus succeeds.  But in ways I never expected.

I hate using the word, but Beg Upon the Light, is a vastly more mature effort than the EP. Whereas the EP waged war in the "shock and awe" style of pure blackened-doom brutality, Beg Upon the Light, is a refinement in Venomous Maximus's warfare upon my ears.  And this is clear from the first notes of "Funeral Queen", a slow organ procession of gothic power.  Like entering the darkness of a cavernous church, eyes searching through the lightning flashes beyond the stained glass for a human face.  But none are to be found.  Only flickering candles burned down to their final deathly stubs, blackened corners where no light can reach, and the thunder outside reminding you that wherever you are, you're not safe.

And the threat of that opening is realized immediately as "Path of Doom" crashes through the ancient sanctum doors, in thundering, plodding riffing.  An otherworldly voice intones something about having to "pay for your sins" and we're off.  From that moment, as the riffing intensifies and finally solidifies into a roaring, post-NWOBHM doom riff, the threat to your aural virginity is assured.  Venomous Maximus have crafted an epic of doom metal, with that grinding riff, an absurd amount of groove, and cycling threads of fiery guitar leads.  And that's where the "mature" word come to my mind.  Whereas the EP simply pounded me, this song moves me.  The groove never lets up, the guitars cascade upon each other in breathtaking ways, and the craft of the song is irresistible, once and for all proving that you can be heavy as fuck, and still have melody, singable choruses, and enough groove to get chicks to fight to be up near the front of the stage.

The next biggest change from the early EP is the vocals.  As I recall, everything I'd heard from VM was growled into my ear.  Not here.  No growling, just one of the more unique voices I've heard in doom.  I can't really call it "clean vocal" because there's nothing clean about it.  It's haunting and sinister and simply demented in tone and phrasing.  It cowls and howls like the mutterings of a man possessed.  I have to admit, it took me a touch of time to get used to the vocal tone, because it simply is otherworldly, and unlike anything I'd really heard before.  But as the spell cast in that evil church grasped hold of me tighter, I realized that those vocals are perfect.  Like the sermonizing voice of a deranged minister, they sing-speak, and wail and harken me into the clutches of the Vemonous Maximus cult.

"Give up the Witch" follows suit, building upon everything that was sounding so fresh and heavy in "Path of Doom".  Big guitars, I mean a monstrosity of riffing, leads us into another hellacious sermon of our mad preacher, all with headbanging fury.   During this song, I realize again just how much better VM is without the growling vocals.  Simply a massive song.  "Father Time" is a meditative reading over acoustic guitar.  Another statement towards the maturation of the band, and their understanding of dynamic and timing, and the need to let things breathe.  I always think that heaviness is much more effective when contrasted by delicate quiet.  A quiet that is shattered to shards by the metallic doom blitz of "Dream Again (Hellenbach), and the chugging riff-fest that is "Moonchild."

Simply put, Venomous Maximus have crafted a true epic album, a redefining of doom as filtered through that mutating toxin in the Texan waters.  An album of unfettered power and passion, unbridled metallic groove, and unhinged sanity.  This one is a game changer for me in the genre of doom.  An album that just seems to get bigger and more important every time I hear it.  If Metroplex Heavyfest happens again in Dallas this year, I'm gonna do everything within my power to get VM to play there, cause I gotta see these guys live.  And they should fit in perfectly with the Dallas bands.