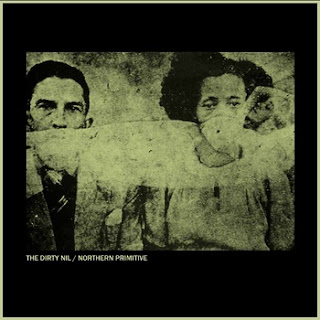 Attention all waveriders who appreciate the alternative rock music of the 1990s.  I’d like you to meet The Dirty Nil.  This trio out of Dundas, Ontario is about to knock your block off!  Seriously, I took one listen to their song off this split 7” with Northern Primitive and I’m sold.  Wow!  Just wow!  The song is called ‘Zombie Eyed’, and I’m convinced it has the power to bring any person zombified before the age of forty back to life.

What does it sound like?  Imagine a scuzzy, slightly sped up version of Smashing Pumpkins ‘Today’ played by Weezer.  Then add massive amounts of additional guitar distortion and a deranged lead singer who sounds as if he is trying to melodically purge all of the anguish stored inside his body in one four minute song.  In case you were wondering, it sounds absolutely fantastic!  Thanks to bandcamp I’ve listened to the rest of this band’s recorded output and guess what?  It all sounds great!  Keep an eye out for The Dirty Nil.  You can bet I will.

As for the other band featured here, Northern Primitive, I feel somewhat conflicted.  Their song contribution, ‘Positive Bondar’, was initially a big letdown for me personally.  Not because the song is of poor quality, but because it is a fairly subdued piece of music situated after The Dirty Nils track (which just finished releasing immense amounts of energy).  Taken by itself however, this song has quite a bit of charm if you like the shoegaze genre.  It reminds me of early Radiohead.  Unlike Radiohead however, this song has some palpable anger lurking under the surface that makes its presence felt more and more as the song progresses.  Well worth a look.