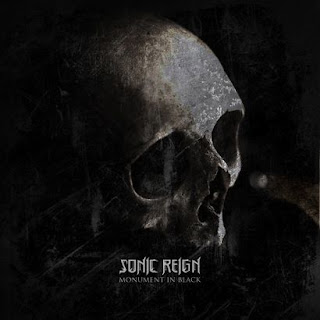 I was trying to think of some really clever way to kick off this review, but I got nothing.  And for those of you who know me, that will not come as any surprise whatsoever.  So let's just get down to business.

On offer today are German death metal merchants Sonic Reign and their latest release, “Monument In Black”.  Or at least I think these guys play death metal.  Their press release says black metal, but I don't hear a ton of that.  What I do hear, and I'm sorry if I've used this phrase before, is metal that just pummels the holy living shit out of me.  In the very best way.  This is a very well recorded, mixed and mastered album and you will definitely hear the auditory ass kicking in its full glory.  If you're a fan of metal that sounds like it was recorded in a dank basement with a boombox from the 80's, this might be a little too clean for you.  But dammit, it's nice to hear all the instruments and for that matter, understand the growling vocals.

This band is really good at what they do, whatever genre you want to dump it into. The song arrangements are nice and tight, and the songs all sound like they are going somewhere, like they have a beginning, middle and end.  Don't laugh, a lot of metal sounds like bands come up with 100 cool riffs and then cut and paste them into “songs”.  I don't know a lot about this band but I would guess they've been doing this a while.

Oh sorry, you wanna know what they actually sound like?  My bad.  First off, to the drummer, you're doing it right.  LOVE the double bass work, fits every song just right.  Again, you can over do this stuff, but not here.  That lends itself to the whole pummeling thing I mentioned above.  I am not trying to be blasphemous, but these guys put me in mind of At The Gates, and you're not gonna get any higher praise in my book.  These are not a batch of songs that just go on relentlessly but monotonously so that by the end of the album you're not sure which song was which.  There is fast stuff, like “Daily Nightmare Injected” and “Abhorrence Vs Scum”, there is good mid tempo head banging to be had with “The Whisperer In The Dark” and “Soul Flagellation”, and when they slow it waaay down on title track “Monument In Black”, they do it well.  It is very enjoyable to listen to a band that understands tempo and dynamics and puts them to good use.  “Pedal to the metal” doesn't always have to be the case.  And good variety makes me want to come back and listen to an album multiple times.  So any of you youngsters out there just getting started with your metal careers, remember that.

This is good, journeyman level metal right here.  As I've said before, every release doesn't have to be a classic.  In fact if it was, then that whole notion of “classic” would be pointless.  You gotta have a pile of stuff like this in the ol' music library so you can just grab something and go, and just know it's going to be good.  Trust me on this one.

The song you posted is very black metal. It doesn't sound like Death Metal to me at all. The Germans have become very good and honing and taking Black Metal further. This sounds good!

This is totally black Metal. I don't hear any Death Metal. Sounds cool though.

sorry for posting twice with the same comment. it appeared this thing wasn't posting correctly. strange.