Ripple Library - Pete Townshend - Who I Am 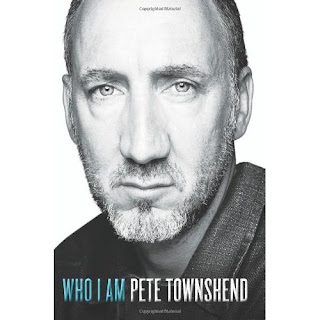 There's been a flood of musicians writing their memoirs the past few years, mainly because they know that they will sell more books than records. Most of them are entertaining reads that rarely go in depth and are ghost written by someone else (Dee Snider's book is an unexpected exception, he really wrote the entire thing himself). Keith Richards' Life caused a big stir when it was published in 2010. I'm not a big Stones fan but I read and enjoyed his book knowing that most of it was probably written by someone else. Alcoholic junkies don't really have great memories. When it was announced that Pete Townshend was publishing his memoirs I knew it was something I needed to read, despite being pretty ambivalent about most of The Who's discography (except for Live At Leeds, of course). Pete's always been well-spoken and active in documenting his life. He even worked as an editor for a book publisher in the 1980's so I figured he'd do a good job.

Who I Am is a must read for all fans of The Who and just about anyone who likes Classic Rock. Like them or not, they were one of the biggest bands of the 60's and 70's and hugely influential. Pete gives an in depth look into his private life and thoughts, which has it's pros and cons as a reader. I certainly have a better understanding of his motivations but there's a lot of stuff I wish he delved into deeper. The stories of his early life are very interesting. Pete's father was a professional musician in the pre-rock & roll era so as a youth he got an early glimpse into what his future would be. His mother drank heavily and young Pete was sent to live with an abusive grandmother that left deep emotional scars on him. His first love was art and then he switched to music. Turned out to be a good move. Hooking up with boyhood friend John Entwistle and then Roger Daltrey in a few bands eventually morphed into The Who. When powerhouse maniac Keith Moon joins the band, the book really starts to get interesting.

The Who were definitely a band in the right place at the right time. Inspired by American R&B hit records on Motown and Stax, and contemporaries of The Kinks and The Rolling Stones, The Who were a rough mix of all of those elements. Their frenzied live shows set them apart and it was during this time period that Pete helped to develop what's now known as the Marshall stack. Jim Marshall was a drummer that had actually played with Pete's father and then later had success building amplifiers. In an attempt to keep up with John Entwistle's massive bass sound Pete asked Jim to build a powerful amplifier and speaker cabinet containing eight 12 inch speakers. The size of that proved unwieldy so it was divided in half and the stack we all love to see on stage was born. I wish there was more of this kind of stuff in the book. Pete casually mentions earlier in the book that he bought an amp at a store where John McLaughlin was the salesman. He never mentions if they had any further interaction. Pete mentions how much he loves the music of Miles Davis and it would have been interesting to hear his opinion of McLaughlin's playing with Miles. That's sort of the main problem I have with this book. All the stuff I really want to know about gets glossed over in exchange for details about his boats, houses, being rich, etc.

During the hedonistic days of the 60's and 70's while every other rocker, especially Keith Moon, is getting totally out of it and into as many groupies as possible, Pete's holed up in his demo studio writing songs. He married young and had kids right away which made him very conflicted. On the one hand he was playing in one of the most exciting rock bands of all time and wanting to get crazy, but also trying to be a family man. Add a lot of alcohol and it results in a very complex psyche. How personal events influenced certain songs are explained but hardcore Who fans will probably feel a little short changed.

As just a classic rock fan, I felt a little short changed in certain areas, too. Pete talks at length about a breakdown he had in New York City recording early versions of some songs that later wound up on their classic Who's Next album. He never once mentions that Leslie West of Mountain was brought in to play guitar alongside Pete. Some of these recordings have turned up as bonus tracks on re-issues and the results are killer. One of the world's most powerful bands augmented with one of the best guitarists of the era deserves at least a paragraph. There's also no mention of the guitar/amplifier combination that Pete used on Quadraphenia that were given to him by Joe Walsh. If you have even the slightest bit of curiosity about rock history this is the stuff you want to know about! Pete also seems to really dislike Led Zeppelin. They're barely mentioned at all in the book, despite having a lot in common with them. He says something about how in 1975 The Who's only competition was The Rolling Stones and Bruce Springsteen. Hilarious.

Something I did learn from this book is that The Who is really Roger Daltrey's band. I always assumed Pete called the shots since he wrote the songs but it turns out that Roger was the tough guy that got the band off the ground and helped keep everyone in line. It sounds like Pete was scared of Roger during most of the band's history. Oddly enough what brought them together was when Pete was investigated for possibly downloading child pornography. The incident is dealt with in detail and really helps set the record straight about a topic most people were baffled by. It must be very liberating for him to finally get to tell his side of the story.

As I mentioned before, if you have any kind of interest in classic rock you owe it to yourself to read Who I Am. The first two-thirds will go by very quickly, even though it left me wanting more in certain areas. The last third when he gets into some of his solo projects, most of which I'd never even heard of, things get a little dull. Probably the best thing about this book is that it caused me to go back and listen to some old Who albums I had not played in many years. The Who are a great band that's unfortunately been over exposed through TV and movie soundtracks, not to mention the sad fact that classic rock radio have beaten many of their songs to death. However, there are a bunch of other great songs that still sound great and I'm glad to be getting reacquainted with them.