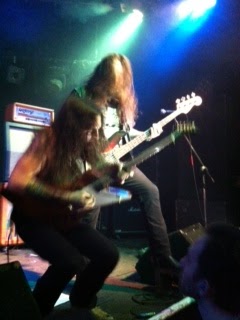 The Date:  February 8th, 2013
The Place:  The Curtain Club located in Downtown Dallas
The Occasion:  Celebrating the re-release of Mothership’s first album on vinyl!

Waveriders there is nothing in this world like a good rock concert.  To take that statement a step further, you’re breathing truly rarified air when you attend a show that incorporates nothing but killer acts from start to finish.  I know you’ve been to some shows where the opener (or openers as the case may be) is either terrible, unpracticed, or a total drag on the overall energy in the room.  It happens and there is no getting around it.  That’s why this Mothership concert was so spectacular.  All killer, no filler!  Even the music they played between bands was great!  So let’s break it down shall we? 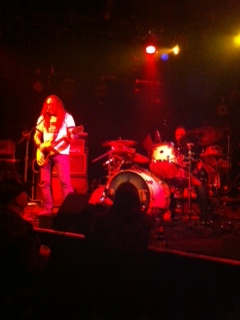 The first band to take the stage was Wo Fat.   Let me repeat that because it bears repeating.  The very first band was Wo Fat.  If you have witnessed Wo Fat do their thing live then you know just how ridiculous it is that they were the show’s lead off performer.  If you haven’t been lucky enough to catch Wo Fat live, or if you aren’t really aware of what they sound like, allow me to lend some assistance.  Wo Fat is the musical equivalent of dropping a freight train on your person…from all the way up in the stratosphere.  Their sound is so heavy, so groovy, and so bluesy it is beyond belief.  People like me don’t need therapists.  All we need to do is stand in front of the wall of sound Wo Fat produces and let the music dispel any negative thoughts and energies dwelling within.  This was the second time I had the pleasure of seeing Wo Fat, and I guarantee it will not be the last. 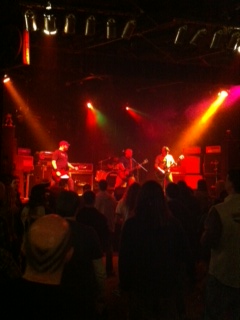 Next up was a band new to me called Mescalero.  I gathered from the press surrounding the show that this was the first time the band had performed in a few years.  It didn’t show.  This hard rocking quartet operated like a well-oiled machine delivering powerful bursts of bludgeoning Sabbath-y riffs that had been marinated with a significant amount of Southern charm.  Their high energy set kept the crowd moving and in good cheer.  My one complaint about their performance had nothing to do with the band itself.  Standing in the middle of the floor I had a hard time hearing the lead guitarist’s solos and fills.  This proved to be a rather small annoyance however, and I would recommend Mescalero to anyone looking for a hard rocking good time. 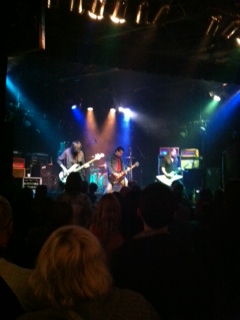 Full disclosure, when I found out that this third band was playing the day before the show I flipped out.  You see waveriders I’ve been a big fan of The House Harkonnen for a few years now (I reviewed their album Volume 6 awhile back), but I’d never seen them live.  Perhaps a higher power was smiling down on me?  I can’t be sure.  What I can be sure of is that The House Harkonnen’s set was downright explosive!  Seriously, those four guys might as well have packed their amps and drums with dynamite because the effect was the same.  I didn’t have a Geiger counter on me at the time, but I’m sure that what took place on that stage went nuclear.  The band has dubbed themselves ‘slop rock’, but there is absolutely nothing sloppy about their caustic brand of hard rock.  Why oh why did I wait so long to see this band?!?! 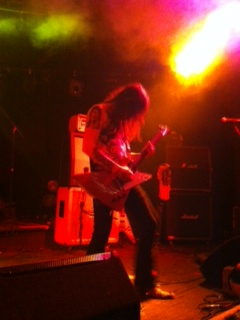 Last but certainly not least, the headliner, Mothership, took the stage and proceeded to blow the roof off of The Curtain Club.  Listen to me folks.  If you enjoy music that is deeply rooted in the spirit of 1970s rock and roll then you simply can’t miss Mothership.  Their show moves.  It grooves.  It shakes.  It moans and groans.  Their songs transition from tranquil to rambunctious at the drop of a hat.  Judge Smith’s drumming is galvanizing.  Kyle Juett’s bass work is dynamic and his vocals are pitch-perfect.  Then there’s Kells Juett on guitar.  Ladies and gentlemen, it is an immense understatement to say that this man is a monster on his instrument.  His playing is so incredibly fluid, and his soloing is wrought with such emotion I’m almost at a loss for words.  It’s sublime.  With great gusto Mothership tore through each of the eight tracks off their self-titled debut album (available through Ripple Music I might add), culminating with a massive jam with Kent Stump from Wo Fat, joining the stage in a performance that brought tears to Pope's eyes.

I felt privileged to be in the presence of such invigorating music.  In March, Mothership is embarking on their first US tour supporting the band Gypsyhawk.  Trust me waveriders.  You’ll want to be there when they stop in your town. 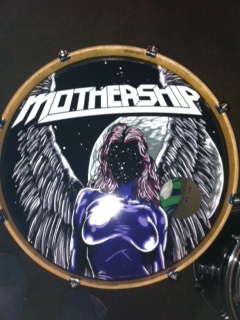