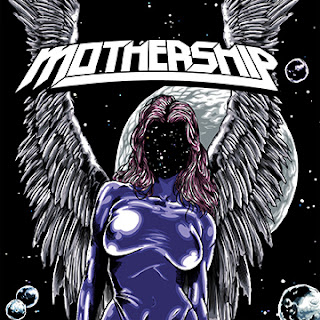 Is this band trying to put the rest of the bands on Ripple Music out of business? Are the bosses of Ripple Music trying to cut their roster down to one band? Knowing the tastes of the label bosses pretty well I can understand why they're both so into Mothership. They have a very deep classic rock groove that is Racer's specialty and also border on the heavier side of metal that the Pope's into. It's as if they decided that dealing with a bunch of bands is too much of a pain in the ass so they'd just create a single band to look after. It's not a bad idea. If that was the goal then I'd say they were successful.

According to the bio, Mothership consists of Juett brothers Kyle (bass, vocals) and Kelley (guitar) with drummer Judge Smith. The first thing I always think of when I hear the word Mothership is George Clinton and his incredible concept behind the Mothership Connection. I will admit that I was a little afraid this was going to be some kind of 90's style funk metal band. Thankfully, these guys are tuned into George but decided to leave the funk alone. Instead they have come to reclaim some of the glory of Eddie Hazel's beautifully demented guitar work on the early Funkadelic albums. Opening track "Hallucination" is equal parts "March To The Witches Castle" (from 73's killer Cosmic Slop album) and early Iron Maiden pummel. It's pretty rare these days to find bands willing to dig deep and come up with something different. Turns out the Juett's dad has a huge collection of 70's rock albums. There's no escaping the boogie when it's bred in you.

UFO and Blackfoot must have played a bunch of shows together at some point in the 70's but so far no tapes of their jam sessions have turned up, so "Cosmic Rain" will have to hold us over until they surface. "City Nights" sounds like first album era Aerosmith covering Motorhead's "Over The Top" with lyrical assistance from the Scorpions. "Angel Of Death" has nothing to do with the Slayer song but definitely brings to mind the Thin Lizzy song of the same name. "Win Or Lose" starts off almost mellow before settling into a Black Sabbath-ish slow ride. The Sabbath influence pops up in the song "Elenin," too with a nice Space Ritual inter(qua)lude. "Eagle Soars" has a nice UFO "Doctor Doctor" bounce to it that Iron Maiden built their career upon. Album closer, the 8 minute "Lunar Master," is a great ride. Starting off very Iron Maidenish, at about the halfway point it breaks down into a quiet, trippy part like the coda to MC5's "Future/Now" before evolving into a full blown "Maggot Brain" freak out.

Now that their album has been fully footnoted, you should be able to decide if this band is for you. If you're a fan of the best of today's regressive rock like Mos Generator, Stone Axe, Grifter, Firebird, Gentleman's Pistol, etc than Mothership is right up your alley. Youngsters from Texas into Eddie Hazel. Maybe their is hope for the world after all.