Magnum - On The Thirteenth Day 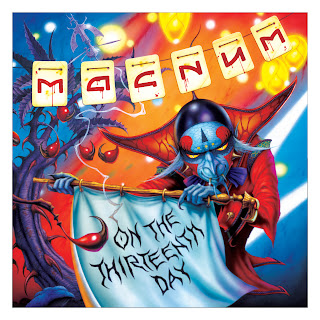 Since the mid-80's Magnum from Birmingham, England has been an important part in my musical life. Even more so when they broke up in 1995. Upon their return to the music scene in 2001 and the album Breath Of Life in 2002 they have had me more concerned about their being or not being. Breath Of Life and it's follow-up Brand New Morning were pretty good and they were still amazing live. However the quality of the subsequent releases left a lot to be desired and I was on the verge of almost hoping they would give it up again. So when On The Thirteenth Day arrived I actually expected the worst...and got the absolute best! This album is right up there with Magnum's best releases On A Storyteller's Night, Vigilante and Wings Of Heaven. What a relief to have them back where they belong, at the top!

All The Dreamers is the best opening song I have heard in a long, long time. After a short choir-like intro that keeps building up, the band launch into full-on rock mode and I basically lose all composure every time I hear it. Lyrically it tells the tale of going to a show on a Saturday night with everyone involved giving their all. There are so many great hooks and riffs on All The Dreamers it almost leads to overload. Also, it's great to hear how well Bob Catley's voice is still holding up. Awesome!

Hooks, harmonies and melodies are in abundance and it could have gone horribly wrong if On The Thirteenth Day hadn't been structuralized properly. But that's not a problem since guitarist and chief song-writer, Tony Clarkin, has done a great job keeping everything in place. In the beginning of this review I did voice my concern that the band, read Clarkin, had lost the plot of late. Like the seasoned veteran he is though any problems has been circumvented this time and there is not a single flaw on the album.

Apart from their riff-laden melodic rock, one of the appealing aspects of Magnum is their Englishness...I have no other word for it. But what I mean is there is a great storytelling to their music but also a melancholic streak juxtaposted with an abundance of hope. You definitely know when you listen to an English band, for better or for worse. In this case, it's pure excellence.

On such a solid and complete album like this there are still a few songs that stands out more than the others. All The Dreamers, On The Thirteenth Day, So Let It Rain and Shadow Town are excellent examples of what Magnum are and always have been and it's extremely pleasing to slap all us doubters in the face with one of 2012's best releases.

If you have never heard of these veterans before On The Thirteenth Day is a great way to discover them. Also check out the these previous albums of theirs On A Storyteller's Night, Vigilante and Wings Of Heaven, they are a perfect way to go deeper into the history of Magnum. They are a great band who have been very succesful in Europe but for some reason they never took off here in the States. So do yourself and the band a huge favour, check them out and give them a chance because this is great music waveriders!