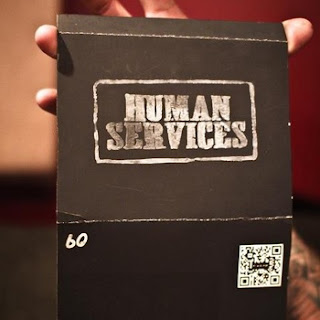 Normally I would snub my nose at an album where just about every song is played in a different style from the other. That's how conceited I can be but usually with an album like that, the music will be all over the place bouncing here and there with no cohesion at all. But Hampton, VA's Human Services self-titled release is not normal...and that's a bloody fantastic thing. Already the first time I listened to it, I grasped it which is a mean feat with me being me and with such a diverse soundscape.

It starts as primitive as it can get. A Love Song is basically a minute of primal screaming backed by some soft jazz. This is followed by General Debility where the band takes on Neurosis with Page Hamilton on vocals. The track is filled with enough hooks to catch the Loch Ness monster and they are reeling me in alright.

As diverse as Human Services is the common threads are, at least in my opinion, angst, fear, rejection, anger and insanity. It's no more apparent than in Warning Sirens For Animal Fires. Most of the song is based on a voice speaking of his imminent death. The voice eerily resembles Jigsaw's in Saw and static, electronic sounds backs up the voice with a bridge where the band goes insane and are totally demented. A truly horrifying song both lyrically and musically which scares the hell out of me every time I listen to it...and I just love it!

In Failsafe the band brings out organs and drums mainly and for a moment I thought Mark Lanegan is their lead singer. Not a bad thing at all if you ask me waveriders. After the rifforama and the volcano eruption that are Squirrel Cage and Mad At Clouds respectively the band takes a sharp left turn with Take Out The Mast. It reminds me so much of the title track, Victor, from Alex Lifeson's solo project by the same name from 1996. Lifeson put music, mainly electronica, to W.H. Auden's poem called Victor and when I hear Take Out The Mast I am quickly transported back to that. Awesome!

The Eater sees Human Services go really organic with their music before they are back in the field of electronica with Messmass and a nice addition of strings. They continue on the electronica path with Demixmas I and Demixmas II where they go all Einsturzende Neubauten on us...and it's fantastic. And amidst all their electronic leanings they still utilize guitars, bass guitars and drums heavily which adds a truly unique blend of music.
Rounding off Human Services is A Lust Song which is the track that sums up the band the best. Here the band, which consists of Sean Sanford - vocals, guitars; Jeff Liscombe - drums, vocals; Donnie Ballgame - noise, guitars; Billy Kurilko - bass, mix insane tribal drumming with frantic singing, electronica, rifforama and full-blown insanity which is basically how their self-titled album plays out.

In all it's darkness and dementia Human Services has created a monster of an album in the best possible way. Like the sickest horror movie there is it scares the life out of me at the same time as it invigourates me. How can that be? Well for one, scaring me like this wakes me up from an everyday slumber. And it acts like a catharsis, it cleanses me and makes me alert. Fantastic, that's all I can say folks...fantastic!