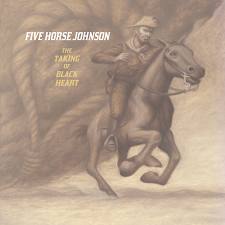 Ok, cards on the table time, I love Five Horse Johnson…big time!!! I would like to meet Small Stone head honcho Scott Hamilton, shake his hand and buy him a beer, not least for the fact that his label is an almost constant yardstick for awesome rock and roll, but because he has given us seven, count ‘em, seven slabs of pure unadulterated blues rock joy in the form of this band’s back catalogue. So, with that in mind, I apologise in advance that this review will NOT be biased and impartial and you know what, it doesn’t need to be. IT DOESN’T FUCKING NEED TO BE OK!!!!

It may be nearly seven years since the last 5HJ album, “The Mystery Spot” in 2006 and, to all intents and purposes it may have seemed as though the band were dead in the water, possibly even to the band themselves, but on “The Taking Of Blackheart” these guys show that not only is there life in the old horse yet, they still have what it takes to suck the life out of most other bands and throw it right back out there as a big old fat hunk of fucking superb.

As soon as opening track “The Job” weaves in on its snaking blues riff and skittering grooves it’s clear that the last seven years have just melted away. 5HJ haven’t spent the time trying to reinvent themselves, they don’t aim to claim unchartered territory here, no, instead they throw out eleven tracks of exactly what they do best…hard edged, filthy blues rock with a swagger. Eric Oblander and Brad Coffin share lead vocals, albeit with Oblander claiming the lion’s share, but both guys are possessed of voices that echo with years of sweat, booze and smoke. Coffin’s voice, though still rough edged is the smoother of the two, time worn with fine bourbon and Cuban cigars whereas Oblander’s speaks of years of hard livin’ and bad lovin’…more cheap moonshine and rough Arabic tobacco!!!! Coffin’s guitar, backed up by former Big Chief man Phil Durr rings thick with Mississippi mud, his slide work flown in straight from the Delta. It sure is good to hear someone playing it old school and not indulging in the increasingly tiresome habit of trying to get deeper and heavier. The playing and the tones here are rich and organic, exactly the way great rock and roll should be. Of course no 5HJ album would be complete with a healthy dose of Oblander’s harmonica and here he singularly fails to disappoint as his harp skills are placed front and centre with Coffin’s lead playing. Of course this review couldn’t progress without some mention of the man holding the reins of the horse for this release. Clutch’s J.P Gaster instils the material with his traditional, eminently danceable fluid groove that pushes the riffs into an almost funky direction, particularly on album curve ball “You’re My Girl” which features a surprise appearance from Cheap Trick front man Robin Zander. Single material here? I think so!!!

So never mind the performances, what of the actual material? No worries there old chap. Each song is a pearl. Ok, so 5HJ may have their style, they may not deviate from that style too often…hey, the blues isn’t the most diverse of genres anyway, but each track is a nugget of pure gold formed from a perfectly executed riff, vocal hooks aplenty and topped off with that groove, that swagger…Hell, it’s almost sexy (unless you’re looking at a photo of the band!!!). The last seven years certainly haven’t gone to waste when it comes to amassing prime material.

I’m going to stick my neck out here and say that this album will be sitting pretty near the top of my list as one of the best albums of 2013…and it’s only February as I write this. That’s how damn special this album is and how confident I am that there won’t be much else to be released this year that will topple it (Clutch and Grifter notwithstanding obviously!!!). Now, hopefully we’ll see them out on the road…and hopefully it won’t be another seven years until the next album!!!