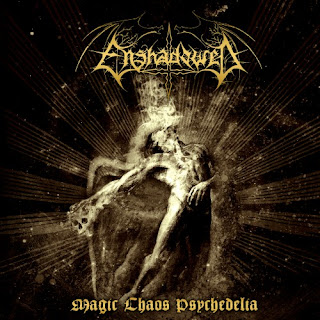 Lotsa lotsa good things in the history of mankind have come from Greece.  This one little place has given us philosophy, math, architecture, roots of language, some awesome mythology and so much more.  And in this particular case, we have Enshadowed and their killer death metal.

I have to admit, this is another band that I did not know anything about before this release.  Enshadowed have not put out a release since 2004, so I guess I can be excused for not having them on my radar screen.  And what a global thing metal has become.  This is put out by a label called Pulverised Records based in Singapore.  I don't know about all that “the world is flat” bullshit that so many people bought into, but the metal world is getting more global all the time.

I have to say that I am pretty fond of Greek metal, at least the 2 bands I knew prior to this one.  Rotting Christ have had a very solid career except for that turd “Aealo” they dropped on us last time.  Septicflesh is another good one, and Fotis Bernando of that band did the recording, mixing and mastering on this release.  To borrow the “recommended if you like” concept some record labels use, you're gonna dig this album if you like Belphegor, Watain, and Neuraxis.

Enshadowed give us some pretty brutal death metal with some nice tinges of black metal and some technical death.  The playing on this album is very solid and the song writing has some nice, intriguing twists to it.  Just when you think you know where a song is going, there is a little something something that grabs your attention, like the mini breakdown in “Surrealistic Shade of Black”, or the swings and tempo shifts in “The Dual Hypostasis of Nihil”.  The title track has some cool percussion and instrumentation as well as some vocals that add a little Middle Eastern flavor to the proceedings.  All of these are well done little touches that are things that are not usually found in this type of metal.

In keeping with our global theme, it is always interesting to see how something as relatively simple as death metal gets various coloration based on the country the band is from.  In broad strokes, you can usually tell whether a band is from Europe or North America.  There is something about Greece that brings out a distinct color of metal.  Perhaps it is the centuries of battle, or maybe the current struggles of the current economy that breed a brand of metal that is very uncompromising and brutal.  Whatever it is, the end result is mighty enjoyable.  Do yourself the pleasure of adding these Greeks to your playlist.