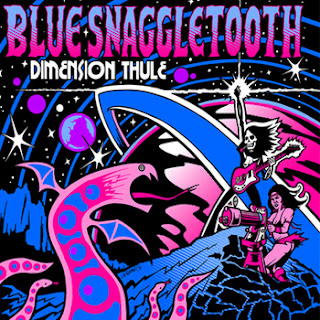 It's time that we all hailed the mighty Blue Snaggletooth.

Coming from another dimension, henceforth named Thule, the Snaggletooth is a ferocious beast, a chimera of ancient rock mythology.  Whereas the famous Chimera of ancient Greek mythology was a monstrous, fire-breathing creature, composed of equal parts lion, serpent and goat.  This Blue Snaggletooth is a raging monstrosity all it's own, composed of equal parts, post-Sabbath heaviness, acrid hazed stoner psychedelia, and a raging inferno of NWOBHM intensity.

And whereas in ancient mythology, the Chimera was finally defeated by Bellerophon, with the help of Pegasus, I suspect that this Blue Snaggletooth chimera shall never be defeated.  It rages too hard.  It rocks with too much passion.  It's just too damn big.

So, it's time that we prostrated in awe and hailed.

It appears that port of entry for the Snaggletooth to enter our dimension was near the center of the land mass we call America.  Michigan to be precise.  Bearing the beating heart of four (near) human components, Snaggletooth took the form of Chrish "box" Taylor on Guitar and Vocals, Ian Harris on bass, Ian "Pit Viper" Sugierski pounding the drums, and Jess Willyard slashing the guitar.  Together, these four humanoids, clearly under the mental influence of the Snaggletooth, propel that mythical beast forward amid a cacophony of guitar thunder, bass-fueled earthquaking, and pummeling drum footsteps.  And amid that cacophony, Blue Snaggletooth unleashes it's tales of swords and sorcery and quests and other worlds and Lovecraftian/Conan/Cthulhu myths.  As Zeus descended upon the humans in eons past, the Blue Snaggletooth has entered our dimension to educate us humans on the power of beast.  And to rock the fuck out.

Dispersing discs of blue-shaded vinyl, Snaggletooth has found a perfect medium to spread its legend.  As the disc spins upon my player, I'm immediately sucked into the world of the Snaggletooth.  "Swords of Atlantis" explodes out of the wired speakers in fiery NWOBHM riffery of the finest order.  Harmony guitars shred and shriek and wail as the Snaggletooth imparts to us the legend of the Sons of Arasmis clutching the Sword of Atlantis and setting humanity free.  The power of the riff is all encompassing.  Instantly, I bow in a head-banging ritualistic worship.

I'm not going to reveal all the secrets that the might Blue Snaggletooth has to unveil, for they must be witnessed first hand to fully become ensconced in their glory.   And unveiled they must be, to each of the humans on this planet, converting the naysayers to the faithful.  Each lesson taught within the sacred blue vinyl is just as powerful as the prior.  Whether it's the spaced out teachings of "Zqeihander" the vague boogey-sermon of "Star Flight" or the post-western apocalyptic scripture of "Insomnia."  Altars and temples must be erected to the wonderous power of the Snaggletooth riff.  The perfect chemistry of guitar and bass and drum.  And within that temple, the Snaggletooth doctrine must be blasted from every available speaker, preferably at at volume that will make the doubters injest their own hesitation.

Blue Snaggletooth has arrived from Dimension Thule.  And all how understand the power of the riff have found their saviour.