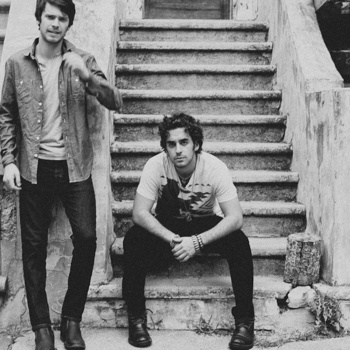 Every generation thinks it has discovered something new and different.  What was blues became rock 'n roll.  What was rock 'n roll became rock.  What was rock became classic rock then became new wave then alternative rock with plenty of little steps in between.  The genre categories have become so sliced and diced that you might as well say each band that has its own sound is a genre sub-category.  Yet, every band's sound is rooted in the past.  There is no Steve Vai without Jimi Hendrix.  There is no Jimi Hendrix without Bo Diddley.  There is no Bo Diddley without Muddy Waters.  There is no Muddy Waters without Robert Johnson. So, when four early twenty year old guys from Brooklyn, New York in a group named Arc & Stones, call themselves an "alternative rock band" with a "new progressive sound," I take the description with a grain of salt.  I mark such hype up to naivete and youthful enthusiasm.

Sure enough my cynicism was validated as I listened to their first and only release, a five track self-titled extended play.  Arc & Stones does not provide a "new progressive sound," it provides some of the greatest sounding classic hard rock anthems and ballads I've heard since the late 1980's.  This is quite an amazing feat when you consider that not one of the band members was even alive when their sound was at its popularity peak.  For this young "alternative band" it might just prove to be a great place to start a rock music career.

The first track on the EP, "Silence",  is anything but quiet. Singer Dan Pellarin (he is also known to pick up a guitar or pick at the keyboards) has the vocal chops of an early Steven Tyler.  They drip with sweet rock emotion.  He just brings it, not just on "Silence", but on all five cuts on the EP. Lead guitarist Ben Cramer ably negotiates the quiet and loud blues-based pleas while bassist Eddy Bayes and drummer Joe Doino pound out the rhythm.  The remaining four tracks, in order, "Say Goodbye", "Let Me Down", "She's Mine" and "Rise", follow a similar curve with slowly building tensions that burst into raucous anthems and ballads of gargantuan proportions.

Significant credit for Arc & Stones' recorded sound must go to a non-band member, Jeremy Griffith, who produced the recordings.  His guiding midas touch is best displayed on "Let Me Down",  with its vocal hooks that build until a choir envelops the listener.   Don't get the idea that this band is all production.  These guys jointly write song lyrics. The classic hard rock throwbacks thrown down do not sound dated. Despite it not being a new sound, this rock music sound is timeless.

Sell music on itunes at ReverbNation.com