APE MACHINE have established a worldwide reputation with their effortless blending of Rock n' Roll, Blues, Stoner-Rock, and Psychedelia. APE MACHINE is out to pound the apathy out of otherwise jaded listeners with a wall of heavy Rock n' Roll. The name APE MACHINE is a nod to the days of reel-to-reel magnetic tape audio recording; a fitting moniker for the heavy-hitting quartet as the band plays through vintage tube amplifiers and lays down its songs using exclusively throwback quality studio equipment.  With a heady mix of animal aggression and technical precision, APE MACHINE's music carries an organic depth and warmth rarely heard since the time of rock's glorious early years (or your Dad's bad ass record collection) infused with an exceptional modern sensibility.  When the mystical lyrics of vocalist Caleb Heinze lock in with the band's stone-cold groove, APE MACHINE demonstrates an earth-shaking ability to rock.  A true four-piece, the group has been called "a rock and roll band with a finger on the pulse of the 70's and their asses firmly in the present" and "real heavy-psych for the iPhone generation" that delivers "true guts and glory rock and roll."
Keeping in line with their proud "retro" heritage, the new album, Mangled by the Machine, was recorded on analog tape and is being pressed from analog lacquers and plates, which will ensure the highest quality analog sound and fidelity.
With a catalog of underground releases, APE MACHINE has gained accolades, awards and a hard earned cult-like status. They have established themselves as the go-to band for those searching out more than just a few killer riffs; a foundation of heavy that will flourish under the Ripple Music banner. 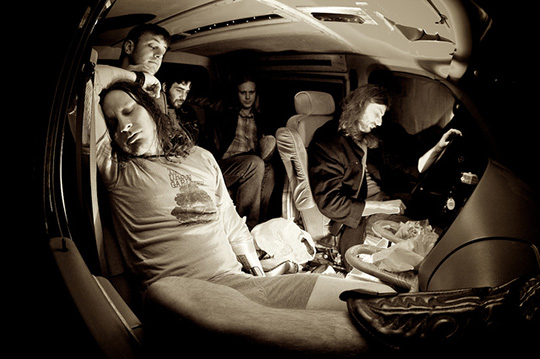 Posted by The Ripple Effect at 3:17 PM