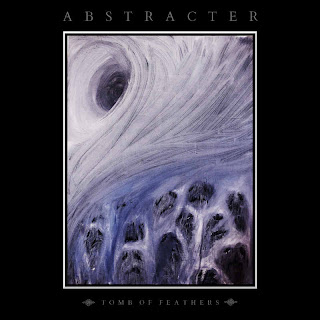 Atmospheric, to the point of rain and thunder sound fx, dirty high-gain acoustic guitars and riffs like a Nebraska blues during a radioactive dust bowl... Pelicany/ Isisish... reverb'd wailing glossolalia as vocals, doing a good cop/bad cop/ evil cop-- with a naked man with a bullhorn screaming at currently-target-acquiring tanks and the a girl suffering from what the DSM XIII will surely call Demon Possession Disorder (Chronic Type)... TOF also gets the silver medal for 2012's Title of the Year with the second track, "To Vomit Crows."

It's three long songs long, it's very evocative and sparse... "Walls That Breathe," with its clean-sung vocals, laden by a distant, vague beseeching, and this for some terrible, unimaginish, tragic cause...

On those rare occasions when you can actually hear it, the bass on this is absolutely great-- there's just enough distortion to make it even greater than you'd suspect and/or expect....

Here also is a "Field Review": I also bought the tape of Tomb of Feathers, and I often and pathologically play it in my wife's 1992 Cadillac deVille with blown stereo speakers: great, rumbled, elided, mumbled Godfleshy, Ministry-on-opium bowel-blowing ensued; Tomb of Feathers is highly recommended for cassette use.