A Couple of Sludgy EPs: featuring Irata and Whores 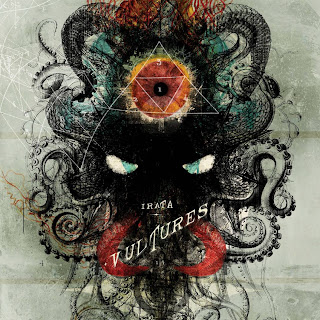 Question waveriders.  Are you a fan of 1990s alternative rock like Jane’s Addiction?  Me too, but let me ask you something else.  Has there ever been a time when you wish Jane’s Addiction played heavier, more distorted music?  Perhaps some tunes incorporating a sound that is somewhat Tool-ish?  You know, something a little less psychedelic and a little more progressive?  You have?  That’s great, because I’ve found a band you needed to hear yesterday!

Irata is an explosive three piece hard rock outfit that calls Greensboro, NC home.  Vultures is the band’s second release, and marks a distinct shift in direction from their debut album.  Their press release refers to their new creative output as “progressive sludge and mathematical doom”.  I’ve tried to manufacture something in my head better than those words but I simply can’t.  That description is perfect!  The bass is fuzzed out and constantly in your face.  The guitar for the most part sounds aggressively dreary and gravelly…in other words, pitch perfect.  The heavy tom and bass drum work help feed the music’s relentless bottom end.  And the vocals?  Close your eyes and you will swear it is Perry Farrell’s twin brother.  The end result is wonderfully endearing to my ears.

Impressively, the five songs on Vultures offer up a substantial amount of variety.  I would say that the EP’s second track ‘Keepers Maker’ is the most straightforward doom-inflected song of the bunch.  Coincidentally, it is also the shortest.  ‘Old Smoker’ and ‘Miser’ give off heavy Tool vibes thanks in large part to their focus on groovy, enchanting basslines.  EP closer ‘Serpents’ fondly reminds me of Floor/early Torche.  ‘Deluge’ is my favorite track off the EP.  More than any other it sounds like a sludged-up, hardened Jane’s Addiction.

Check out Irata waveriders.  You won’t regret it. 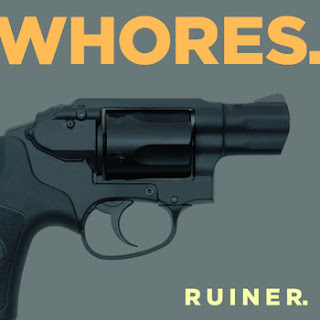 
Hey?  Let’s have a show of hands.  Who here’s angry?  Huh?  Who here’s upset?  Has anybody ever felt dissatisfaction build inside you until you want to destroy everything your eyes fall upon?  Waveriders I see all your hands and I’m here to tell you that I’m just like you!  Does anyone find solace in ultra-sludgy guitar tones, crazily distorted bass grooves, and downright tectonic drumming?  Yeah, me too.  It is with great pleasure that I direct your attention my brothers and sisters to the debut EP from Whores.

Regular visitors to The Ripple Effect may remember that Racer X reviewed this same EP back on October 1st of 2012.  He wrote a fairly glowing review.  I’m going to follow in his footsteps.  Ruiner is the perfect soundtrack to a controlled demolition.  When the brief introduction to the first song ‘Fake Life’ ends and the immense heaviness of this band lands its first nasty uppercut, the only thing the listener can do is succumb to the overwhelming weight.  All worldly concerns get viciously stamped out, and the music is all that remains.  This is therapy at its finest!  Now how to describe the music?

Clearly Whores want to steamroll their listeners.  Racer picked out hardcore punk elements within the band’s sound.  I’m afraid I can’t really concur.  What I hear is one of the nastiest sludge metal bands I’ve come across.  The riffs!  Oh, the monstrous riffs!  And then there’s Christian Lembach’s demented vocals.  Wow!  But what really sets this band apart from those I’ve heard before are the absolutely sinister grooves within each song.  If you’re not banging your head back and forth like a madman during every one of these songs you must be comatose!  Heck, I throw my whole body into it…at least, when I’m inside my saferoom.

Bottom line waveriders.  If you consider yourself an irate, pissed off individual then I’ve written you a new prescription.  Listen to Whores’ Ruiner EP and feel better.  It’s that simple.