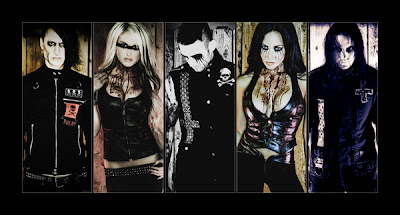 With heavy metal and horror-inspired theatrics fascinating crowds worldwide, the BUTCHER BABIES has emerged as one of the biggest draws on the Sunset Strip in their hometown of Los Angeles, CA.  Within a few short weeks BUTCHER BABIES has made two huge announcements: a record deal with metal label CENTURY MEDIA RECORDS and a 2013 North American tour with shock-rock icon MARILYN MANSON.  A list of confirmed dates can be seen below.


In addition, BUTCHER BABIES is proud to announce that they have been confirmed to play Hell & Heaven Metal Fest 2013.  The festival is on May 18th and 19th in Guadalajara, Jalisco, Mexico.  MOTӦRHEAD, ANTHRAX, SUICIDAL TENDENCIES, and MOONSPELL are already confirmed for the festival along with a number of other key acts.  Additional details on Hell & Heaven Metal Fest 2013 will be released and more information on the event can be found here: www.hellandheavenfest.com


Fronted by Carla Harvey and Heidi Shepherd - named two of the year's 'Hottest Women in Rock' by Revolver Magazine - BUTCHER BABIES has brought their show worldwide wowing UK fans at this year's Download Festival and as support for ANTHRAX in Cardiff.  Following their UK appearances, the band returned to America as direct support for OTEP and just wrapped up their first headlining tour.