The Machine - Calmer Than You Are 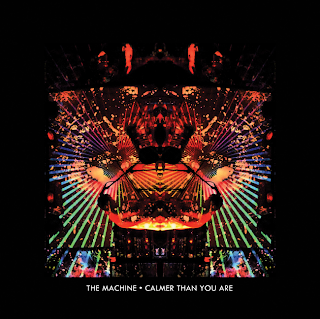 Oh yeah, now we're talking folks. This Dutch trio knows what it's all about. Just turn off the lights completely, light a candle or two or maybe turn on a lava lamp. Sit down somewhere comfortable, start Calmer Than You Are, crank up the volume, stare at the lights and The Machine will take you anywhere you want to. It's a great journey indeed!

These guys are definitely a stoner band and subsequently references to the mighty Kyuss are impossible to ignore, that goes for every stoner band. But The Machine has something different going on if you side-step the Palm Desert influences. Beyond the stoner heaviness, they conjure spacy, trippy psychedelica akin to get-on-the-magic-carpet-ride and it's an amalgamation I really love. Simply because when blended together the juxtaposition of these two elements has such a calming and soothing effect on me, hence the title Calmer Than You Are perhaps? At the same time it can get me into the groove as well, it just depends on the situation.

Calmer Than You Are is The Machine's fourth full length, the third for Elektrohasch, and for some reason I have totally missed out on them. This is more than redeemed with this offering though. Despite clocking in at just about 46 minutes a distinct jam-feeling is apparent throughout which, after checking out the band's catalouge, isn't strange at all. Up until now The Machine were clearly a jam band but with Calmer Than You Are they have opted for a rawer more distinct sound albeit without losing any of their past. And that works real good for me.

Frontman David Eering - vocals, guitar - uses fuzz and wah wah pedals perfectly and elegantly helping their music to their new-found direction although during the first half of opener Moonward his use of the sitar keeps the link to their past well and alive. The song starts off slowly keeping it stoney and trippy but about halfway in the band, completed by Hans van Heemst - bass guitar - and Davy Boogaard - drums, pounds me into the ground by switching tempo and going all heavy. While David is riffing like there's no tomorrow Hans and Davy's rhythm work simply pummels me into oblivion. It's like a bulldozer on a rampage. And this is how Calmer Than You Are plays out, it switches between slow and heavy without being all over the place instead it works perfectly. The only time the band reverts to the music from their previous albums is on Sphere(...Or Kneiter). At 12:22 they allow themselves room and freedom to improvise and jam and it's beautiful.

Like I mentioned earlier The Machine draws their inspiration from two elements stoner rock and psychedelia. And where so many others fail they are solid, adventurous, skilled and absolutely brilliant. Roaming within a genre that draws so much inspiration from one single band, Kyuss, The Machine have found their own path and there's only one way for them...up! Don't miss out on this three-piece because they deserve to be out there and you'll do yourself no favours by ignoring them. Good stuff indeed.