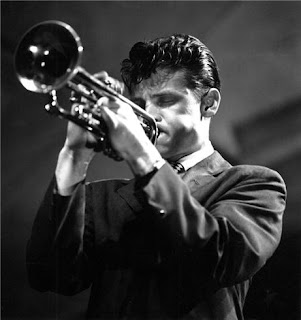 Originally published in 1946, with music by Walter Gross and lyrics by Jack Lawrence, and most notably recorded by Sarah Vaughn, this standard has been published in several striking colors and shapes: generally in Eb, and in either 4/4 or 3/4 time.

Of the literally hundreds of recorded versions of this song, I in particular dig eleven-- those of:

Particular Highlights?
Chet Baker: a familiar recitation of the minimal number of notes necessary to recognize the melody (C-D-F E on trumpet); this is my favorite version, probably, with hundreds of plays on iTunes... Chet establishes a familiar refrain (A, A#, E, F), this showing up several times during the piece, and one on which it ends.

Miles Davis: impatiently blurts out the melody at 0:20 (from Miles Davis live at Birdland, 1951-53), but otherwise (and this notably) ignores it....

Don Byas, also with a bitchin version (playing with Sir Charles Thompson)-- Byas' signature "could be crazy loud and brash because of the mechanics of his mouthpiece setup, yet rarely is, and is usually quite subtle" tenor sound, adding a bit of grit and pathos to what could easily become syrupy... Byas' muscular playing (especially for the time), replete with his (at 6:45) restatement of the melody in three octaves, makes this a great version, and just behind Chet Baker's. It ends at 7:00 with beautiful, quick and gentle "inverted U"-shaped runs runs through the melody, à la Coleman Hawkins....

James Carter's starts with a very fragile trumpet with the melody, and his bari sax playfully in the background... a Loki to the Thorish trumpet... and finally David S. Ware's version is Albert Ayler-ly awesome....

It's a great, simply, emotionally-moving tune-- no wonder so many greats had such fun re-reading it.