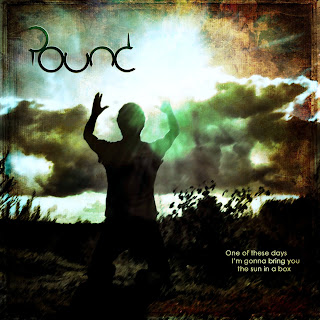 I like Swedish women, pancakes, meatballs, Smörgåsbord, Alfred Nobel, Greta Garbo, Ingrid Bergman, old Volvos and Great Danes.  I also like Pound’s brand of Swedish alternative rock on their new album release, One of these days I’m gonna bring you the sun in a box.

Pound, formed in the middle of Sweden in 2004, consists of Stefan Altzar (guitars & lead vocals), Christian Larsson (bass & vocals), Samuel Granath (drums), Janne Korpela (guitars) and Kalle Sandström (keyboards & vocals).  One of these days I’m gonna bring you the sun in a box is Pound’s fourth release, second full length (thirteen track) album and, by far, has the longest title of all of their releases.  It is heavy, bright, symphonic, well written, steeped in rock hard harmonies, beat and keyboard driven and as majestic as the Skanderna and as sparse as Norrland.

The album starts with part one of its namesake, a classic string pinched orchestration of ominous foreboding - an allegro for the album.  It sweeps directly into “Apocalyptic Smile”, a galloping, swirling keyboard rocker with great vocal harmonies and a hook. It is the allegro con brio. A bass heavy and hard rock guitar blues driven sound blasts out “She’s A Killer”,  with just as killer vocals.  Then, the album gets more frantic with “My Friend, The Ghost”, a great hard rock mood piece with added keyboard eery spookiness foreshadowing the spirits that explode in vocals and a wall of sound.    The wall of sound surrounds the soaring vocals and harmonies in the rock love ballad, “Impossible To Kill”, that follows.

Club dancers will instantly love “Last Show For Mary And Me”, a disco bit of electronica with video game-like keyboards, bass, tight vocals and toe-tapping drum beats that seem made for the colored flashing lights of the dance floor.   Pound redeems itself from what could have turned into disco hell with “City In The Sun”, a hard rocking piece of late seventies inspired showmanship.  Think Kansas on steroids. The song “Secret Friend” is a counterbalance. It is a sparse acoustic, story-telling voice and guitar piece that almost ends in a raga. It abruptly stops and gives way to “Diamonds In The Dust”, a pounding fuzzed bass driver of a tune that breaks into an alternative rock anthem before going on to “Permanent Vacation”.

Almost three quarters of the way through the album Pound goes pure sugar pop with the appropriately named track “Radio”. It makes me think that the tune is really a tongue in cheek joke, especially since what follows,  “Freedom (2.0)”, should get kudos from a host of classic rock heavyweights for its orchestration, lyrics and execution.  The album comes full circle with the final track “I’m Gonna Bring You The Sun In A Box (Part 2).”  The classical clipped strings of part 1 return but now they are softer, less anxious and a bit airy. Over it all Stefan Altzar theatrically sings the story of bringing the sun in a box and then Pound marches in changing keys to a final triumphant and exhilarating crescendo and finale.

Do I like this band? Yes.  Do I think you will like this album?  I’ll answer with another one of my favorite products from Sweden - Absolut!