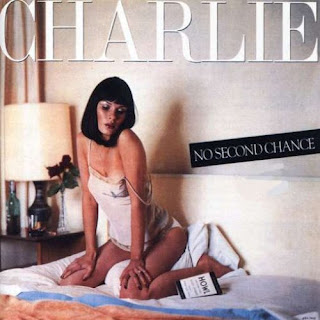 I'll never forget the first time I saw a stack of Charlie records.

I must've been about 13 or so and was heavy into the grips of hard rock.  With my best-friend's brother's record collection as my muse, I knew all about the big bands (Lizzy, Sabbath, Zeppelin) and thought I knew all the second-tier also (Wishbone Ash, Nazareth, Widowmaker).  But there I was, visiting the house of my parent's friend, who happened to have a boarder staying in the guest tower.  (Yes, it really was a tower.)  This guy was an artist and a musician with a nice stack of records on the floor next to his futon.  And on top of the stack, was Charlie.

Now, obviously, that album cover (and the whole series of female model covers they put out) was designed to catch a teenager's attention.  And it did.  But what also captured me was the thought that there really was a whole world of music out there that I didn't know about.  With that realizaton, a lifetime of bargain bin hunting was born.

I don't see much written about Charlie and their classic grouping of albums in the mid-late '70's, and that's too bad.  At their best, Charlie sounded unlike anybody else in the industry.  Sure, with time, American record labels would try to force them to be the next Foreigner or REO Speedwagon, but that wasn't where their hearts were.  In their souls, Charlie were one of the smoothest, jazziest, seventies bands out there, and when they were firing on all cylinders they were something special.  Over the course of a long discography, two albums really stand out as definitive Charlie.  1978's Lines, and this tasty choice from 1977, No Second Chance.

Charlie started out from the ashes of the British band Axe (Terry Thomas, John Anderson, and Nicko McBrain). This version was short lived however, as Nicko left due to personality clashes (later to become the drummer for Iron Maiden) and Steve Gadd came in.  They released their first album, Fantasy Girls, in 1976 to good response, but in reality, they were still searching for their sound.  That all came together perfectly on the next album, No Second Chance.

From the first hesitant stuttering guitar that leads us into "Johnny Hold Back," we're introduced to Charlie's rather unique take on 70's pop.  Terry Thomas, the lead Charlie, had a idiosyncratic, slightly-neurotic, nasal singing voice that perfectly captured his left-of-center stories.  Nothing appealed to Thomas more than stories of the underdogs, the lost cases in the city's underbelly, the oddballs and losers of this world, and "Johnny" was no exception.  "Johnny was a boozer, at romance we was a loser, no love life/alcohol made a strange wife/I said it's love on the rocks," he sings over  a pulsing, jazzy beat.  Gadd was impeccable with his drums, dropping in the perfect fills for the stuttering verses as big horns wail in the back ground  Then there's the real signature Charlie sound; slickly produced harmony vocals including Thomas dubbed against himself.  No one else ever captured that classic Charlie multi-vocal attack.  As always, the chorus was infinitely melodic and singable. Stick around for the staggering guitar solo that seems to fall and stumble out of the guitar just like a drunk Johnny stumbling down the street and we got ourselves a real winner.

"Turning to You," is more of a conventional pop song that really should've earned tons of radio play.  Think Jefferson Starship in their best days around Red Octopus (and Miracles) doused with the jazzy inflections of Steely Dan and a touch of the idiosyncratic approach of prime Supertramp and you'll get a flavor of Charlie.

Charlie's Lines may have been a better pop record with songs like "She Loves to be in Love" which graced the lower reaches of the charts, but No Second Chance was the better rock record.  Songs like "Don't Look Back," reveal Thomas at his best outside the standard pop convention.  What starts off in the frame of a tender ballad, slowly builds in intensity with some searing guitar licks reminiscent of Santana.  Charlie's typical gangland harmonies take over, flowing on top of the brooding guitar licks and somber melody.  Another tale of lost dreams and fading glory, Thomas really nails the mood here, letting the song breathe and grow to emotional heights during each of the moaning guitar breaks.  "Pressure Point" lightens the mood with it's gaily strummed acoustic despite another tale of Thomas's woe.  "These four walls don't make no home/I'm here with you but still alone," he sings against the irony of a buoyant synth line and uptempo beat.

Then comes "Thirteen" the emotional epic of the album.  A tale of a young girl, who fell in love at 13, married at sixteen, mother of 3 by nineteen, who's left to look back at her life of broken dreams and lost hopes.  Thomas and company totally nail it here, with a melody and acoustic guitar line that can only be described as haunting.  And stunningly beautiful.  And if it's guitar you like, the leads here simmer with unspeakable heat.

That's just side one, with a whole second side of immaculate pop waiting to be explored.

Charlie had a few minor brushes with the charts over the early years, then finally hit the big time with "It's Inevitable" in the early 80's, but by this time, the record company was trying to make them the next Foreigner, demanding that Thomas be replaced on vocals for a more traditional singer.  While the accompanying album had some good moments, the passion of what Thomas seemed to want to be doing was lost, crushed under faceless American production.

Charlie faded into oblivion but not before they gave us some absolute lost classic albums of sophisticated, jazz-tinged art-pop.  If bands like Supertramp, Steely Dan, and classic-era Starship appeal to you, you won't be disappointed with "Lines," or this bargain bin treasure, "No Second Chance."

Actually met Terry Thomas and the band in San Diego in 1977 via Playboy playmate Candy Loving. I got "Fantasy Girls" signed by the band and a kiss from Candy but seem to have lost the album somewhere over the past 35 years.

Hey, sweet! I have that book!