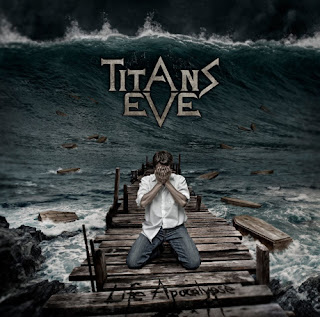 Even though they're Canadian, Titan's Eve, and their Life Apocalypse, play German/ Japanese-technology-style thrash metal: a product done more efficiently, more Zen, than anything before it-- and completely without originality. This is a product, make no mistake-- but it is a superior product; from production, to recording, to delivery.... This is the 72-inch flatscreen to your parents' cathode-ray tube monster.

Allow me to expand this. It does most thrash metal a service, particularly American varieties, and of these particularly the recent rethrash, to not think of it purely as music, but also as sport.

Just as you wouldn't criticize a long-distance runner or a long jumper for their lack of variety in technique ("He just puts one foot in front of the other as fast as possible," or "She just jumps super high in the air-- SEEN IT!"), don't criticize most thrash because there's very little original about it.

Hell, Vio-lence is probably my favorite thrash band of all time, and "Kill on Command" my favorite song of theirs, but there's pretty much nothing original going on there, and that was in 1988-- just a robust athleticism and great enthusiasm about their neck-snapping tempos and dental-work-melting shifts, twists and turns.

Such is the case with Titan's Eve.

"Destined to Die" stomps hard and ugily (that's an adjective), forebeat and tribal drums shaking your (and presumably their) colon, but then the chorus comes up and sounds almost like heavier Keel or Helix, of all things. It's some catchy shit, though, and it's refreshing to see a modern band that can so clearly write a song-- however fast it goes by.

Each tune here follows this blueprint; there's not a particular weak point on the album, aside from the instrumentals (I'm generally not a fan of them in bands that usually have a singer, for some reasons); give em a hear. Give 'em a listen. I bet something on Life Apocalypse grabs you-- and you, it.

I mean "adverb," damnit! Adverb! Uhg. I am stupid.