The Wounded Kings - In The Chapel Of The Black Hand 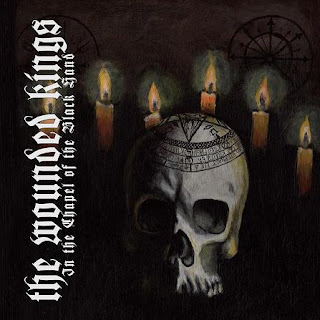 The current crop of invocative, transcendental and occult British doom is very fertile right now with especially Alunah and The Wounded Kings leading the way. And with their third full-length release In The Chapel Of The Black Hand The Wounded Kings raise the bar even further.

This time around multi-instrumentalist Steve Mills has gathered a proper line-up around him, even though his long time partner-in-crime George Birch is no longer within the fold. Despite this loss the band sounds better than ever without losing any of their characteristic traits. On their previous albums Embrace of the Narrow House and The Shadow Over Atlantis George handled the singing wonderfully backed up by Steve, but on In The Chapel Of The Black Hand Sharie Neyland lifts the songs in a way George never could and that alone has elevated The Wounded Kings immensely. Her voice is in a range well above George's and silmilarly to Soph of Alunah she moves so elegantly and fluently between frailness and total savageness.

I don't know if it is the geology and history of the band's home area, Dartmoor in south western England, that plays a big part in The Wounded Kings' sound and lyrics. Dartmoor is a desolate moor and I am pretty sure wandering around there allows your imagination free reign and brings awesome song ideas. If it's true or not I don't know, but what I do know is that In The Chapel Of The Black Hand invokes images of foggy desolate lands with other-wordly beings roaming there in search for proselytes. And imagery is big thing for the band. To me they want to open up the listeners minds and let their music build pictures and scenes that befits each individual and expand from there. Of course The Wounded Kings have their own message but they freely allow their listeners to create their own visions from the Dartmoor band's palette of occultism and doom et al. and I love it. Giving your listener that opportunity and freedom is a great feature with any band and it shows great musical talent and knowledge.

In The Chapel Of The Black Hand consists of four songs and while each song works perfectly on its own, it is as a unit they really come to their fore. Lasting 41+ minutes the album is like one long song divided into four chapters that flows in perfect harmony. Some might be discouraged by the long playtime over only four tracks but once I hit play I'm taken away until the title track ends and it feels like I just pressed play....the repeat button is therefore a great invention dear readers.
Apart from the instrumental track Return Of The Sorcerer lyric-wise the band tells us tales about Dionysus in The Cult Of Souls, finding yourself in Hell and giving your soul to Lucifer in both Gates Of Oblivion and the title track In The Chapel Of The Black Hand. If occultism is not your cup of tea simply embrace the music. Like I wrote earlier, the band has their message but their music allows the listener his or her own interpretation of the songs so let that absorb you and enjoy the ride.

So if you like slow, evocative, 70's tinged doom verging on the pshycedelic sometimes this is an album for you. When The Wounded Kings were still only a two-piece they were more doomy than anything else but by assembling a full line-up with Sharie Neyland on vocals they have grown and while still being a doomband their musical texture has expanded and improved the band immensely. Very good stuff indeed!