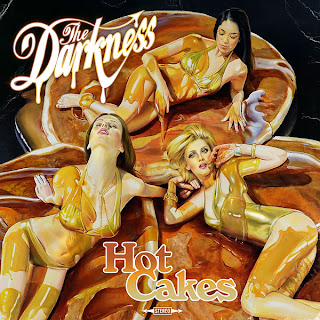 I like albums that surprise me.  Honestly, I don’t even know why I picked this one up.  I had read something good about it, but I’ve never really followed this band and other than that big hit they had about believing in a thing called love with the singer with the freakishly high voice, I didn’t know much about them.  I don’t know how this compares to their previous work.  But I do know that this album rocks.

One of the things I really enjoy about this release is the very obvious sense of humor these guys have, much of it directed at themselves.  It’s good to see a band that doesn’t take what they do so seriously.  It’s good to remember that you’re just a rock band and you do what you do basically for the entertainment of others.  Keep it in perspective.  And that is what The Darkness does.

There are 11 tracks on this release and to my ears, they are all solid, straight ahead rockers.  Nothing fancy here, but if you want so tight rock and roll songs look no further.  The album kicks off with “Every Inch Of You”, and it gets things going with a bang.  Every other track is just a nod to good, British rock as it has been delivered to us for the last 45 years of so.  The playing is not too precise but by no means sloppy, it just has the good rock feel that gets your toes tapping and your hips moving.

The band is obviously influenced by the many bands they heard growing up and coming up.  There is even a direct reference to “Communication Breakdown” in a song lyric.  Queen are definitely an influence as well, especially in the vocal harmonies.  Some of them are so Queen-like that it made me dig out my Queen box set and listen back to some albums I haven’t visited with in quite some time.  There’s a little bit of a glam feel to some of the tracks as well, and in my opinion nobody does glam like a British band.  And again, that is a good thing.

The drumming on this release is what really makes it.  There is incredible interplay between drums and guitar, drums and bass, and the drums are always exactly where they need to be.  Just outstanding playing throughout.  The timing is perfect and every little fill and backbeat is precisely in the right place.  If you’re going to have a solid rock album the drums have to do it, so kudos to Mr. Drummer on this one.

Don’t even hesitate, if you are at all a fan of rock n roll just go out and get this.  You will not be disappointed.  It’s not a game changer, it’s not going to solve the world’s problems, but it will make you move around and think about how wonderful it is that rock music was invented.  This certainly has to be considered a comeback album and these guys are back in a very serious way.  Despite poking fun at themselves for much of the album.