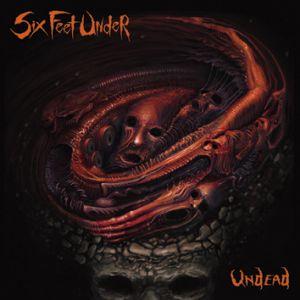 They say that familiarity breeds contempt, and I believe that is definitely true in the metal community.  Or if not contempt, at least a lack of appreciation.  Six Feet Under is a perfect example of this.  I know, they don’t help themselves any when every other release is an album of covers.  Although, from experience, playing covers is not the piece of cake everyone assumes it to be.  For some reason, because they keep pumping out solid, workmanlike albums, they are taken for granted, underappreciated, and yeah, treated with contempt.
I would like to argue in their favor, and use the latest release, “Undead”, as my evidence.  I grant you that there is nothing really new and groundbreaking here.  But at the same time, how awesome is it to just be able to pick up an album, take it home, put it on, and know what you are getting?  I mean really, there is so much shit released these days, even from bands that have done solid work.  Do we have to get a release every time that is pushing the envelope, trying something new, and that often backfires?  I’m obviously arguing that no, we don’t.
This is a damn fine release and there are some very killer tracks here.  “Formaldehyde” is easily the best song on the album for me.  There are some wicked tempo twists and turns, where you think it’s going one way only to turn around on itself.  And the guitar soloing is right up with the best I’ve heard lately.  “Missing Victims” is another that stands easily on its own and is not a clone of anything.  Nice tasty riffing and some great lyrics, and yes, I can and do understand them.  “Delayed Combustion Device” is another top notch effort that really shows what this band can do.  And if you really need something that shows that Six Feet Under have something new under their belt, check out “The Depths Of Depravity”, the album closer.  There is nothing else on this album and little in their entire catalog that will rival this for presenting a little sonic diversity.
To me, there is absolutely nothing wrong with a band finding their style, their niche, their thing they do really well, and sticking to it.  Yeah, maybe you can say they are playing it safe, maybe you can find fault with it, but why?  I know, I know, art is supposed to be about creativity, going new places, etc.  But there is also a lot to be said for familiarity being a good thing.  It’s great to have those special people that we feel totally comfortable and familiar with; it’s awesome to sit down to our favorite meal.  Hell most of us have a movie or two that we will watch over and over again just because it is familiar and enjoyable.  We like to have our “go to” thing.  So let me argue that if meat and potatoes death metal is your thing, then Six Feet Under is your “go to” band.  You can count on them to deliver the goods, and they do it once again with this release.