Punk Me? Punk You! Featuring Down By Law, Police & Thieves, La Armada and the Punk 'N' Pissed Compilation 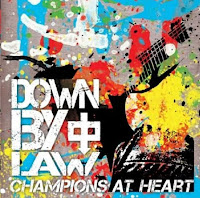 Down by Law - Champions at Heart

This is what pop punk is supposed to be!  By that I don't mean Down by Law have sold out, purchased eye-liner and gone all emo-trying-to-be-Green Day.  I mean this is punk.  Pure, vitriol, spittle and rust punk.  But it's infused with so much melody, so much variety, and so damn much passion that I find myself humming certain songs all day.  The melody to "Nothing" definitely has burned itself into my brain.  They remind me of an old Swedish punk band, The Bones, who also effortlessly blended hardcore fury with true singable-pop sensibility.  "Bullets" is just a pure charging assault of Oi! punk energy, while "New Song"  reminds the listeners that these guys have been at this game for awhile, learned a few lessons, and got no time to waste on today's wannabe punks.  Mix all that passion with the life-weary, whiskey-soaked-nicotine-sponge that is Dave Smalley's voice and I find a quasi-ballad-cum-punk attitude cut like "Knock this Town" damn affecting.
I'm not gonna pretend I know all there is to know about these guys (like it's been 9 years since their last release), I'm just gonna spout it like I hear it.  Champions at Heart is easily one of my favorite punk releases this year.  On DC Jam Records. 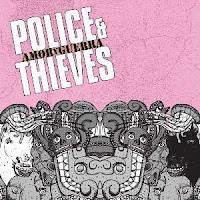 The best review read about Police & Thieves blitzkrieg of hardcore punk said something along the lines of; "Police & Thieves play straightforward hardcore that's a little melodic without really being melodic at all."  Brilliant summation of this reissue of blistering punk madness courtesey of Salad Days Records.   Best as I can tell, this is a compilation of all the Police & Thieves urgent 7" missives from earlier in the decade beefed up with a couple of extra "lost" tracks.   Think Dag Nasty and Verbal Assault, cause Police & Thieves burst out of the DC punk scene like mad dogs frothing at the mouth.

If you think punk rock is supposed to bitch slap you across the face before ripping off your nutsack, this might be up your alley. 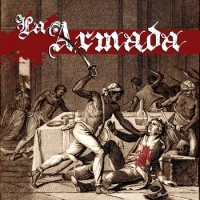 Speaking of ripping off your ballsack!  How about ripping it off and using it like a blackjack to beat you into unconsciousness!  La Armada pick up the Latino hardcore flag previously carried by Los Crudos and Huasipungo.  They're pissed, they have capitalism in their crosshairs and they're not afraid to pull the trigger.  In fact, they'll keep on blasting until nothing is left but a rotting husk.  Powerviolence mixed with hardcore punk, buzzsaw bursts of guitar, vocals swallowed a guttural roar.  This sounds like the call for a Latin American revolution.  A touch of Agnostic Front and the fury of Bad Brains.  Intense and not for the timid.

A lyric sheet translates their hatred into English.  But you don't need to know the specifics.  Their anger comes through loud and clear in any language.  Latino hardcore fury indeed. 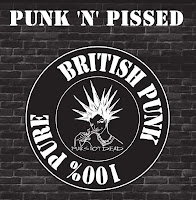 A flat-out blast of a compilation of high energy punk courtesy of Unrepentant Records.   And I mean a blast, as in a blast of fun. Some of the cuts on here are pure treasures and definitely serve their purpose of making me want to track down more from the bands.    Tops on that list is UK Vomit, who turn in a vertiginous whirlwind of wry humor, slashing guitars, pounding skins and belched gangland vocals with their must-be-a-classic-someday ode to punk living, "Drink Fuck."  An absolute revelation of current wave British punk.  Then the band have the guts to follow it up with the country-blues swagger intro for "Eat My Hole."  Of course, the songs quickly busts into a frenzy of UK Subs-inspired punk, more fitting of the compilation, with lyrics like "You're a fucking useless wanker, and your head is full of shit/ You're a fucking useless used tampon and your head is full of shit."  Seriously, brilliant, classic stuff.

Each band gets two songs here to make an impression and several do. Citizen Keyne blasts some more trad British hardcore with a vocal nod to Ian Drury in their smash-up "Police State"   Total Bloody Chaos bring some bloody good dual spat our vocals to their hardcore mash-up "NHS Death Squads".  Far too much to go into here, but in the end, it's a spasmotic assault of 52 minutes of belch your face off hardcore.