Michael McDermott - Hit Me Back 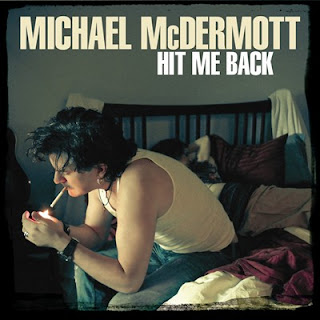 So begins the chorus on the song "Hit Me Back" on Michael McDermott's recent thirteen track release of the same name.

Hit Me Back is an autobiographic album of redemption and renewal. In 1991 McDermott had a Billboard 100 hit with "A Wall I Must Climb." He toured with, and opened for, Van Morrison, The Cowboy Junkies, Cracker, The Wallflowers and 10,000 Maniacs.  Then, he was on top of the world.  Even horror writer Stephen King was inspired by McDermott.  He quoted McDermott's lyrics in his book Insomnia and in his novel, Rose Madder, one of King's characters almost always wears a McDermott T-shirt.

Unfortunately, the two decades since McDermott's early success have not been kind. He has travelled a road of debt, addiction, recovery and, in his own words "misplaced ambition."  However, greatness often arises from hardship.  For a singer-songwriter, such experience is the clay with which he or she works as an artist.  It forms the lyrics and music from the songwriter's soul as only he or she can express it.  Hit Me Back is that introspective an album.  It is also a reaffirmation of the life and the greatness of Michael McDermott as an artist.

As you can tell from the first track, "Hit Me Back", this is a personal journey as McDermott sings of his alcohol addiction.  The lyrics are clever and sung over a fully orchestrated classic folk rock that is riddled with musical hooks.  With "Let It Go" McDermott writes and sings of the downward spiral of his life during the last decade and how he became out of control.  It is beautiful, empathic music.
In 2009, McDermott married in Italy and now is a father. The song "The Prettiest Girl In The World" recounts the courtship.  It is a fantastic amalgam of desire and happiness.  "Dreams About Trains" is an ethereal analogy about the deep and desperate state McDermott was in and where he has ended.  It gallops forth with intertwined harmonies that make the entire song itself feel like a dream. The song "I Know A Place" is a stark guitar ballad that recounts memories from McDermott's 1990's touring days and his decades long death spiral:

An explosive track, "Ever After", returns with a more rocking, energetic treatment. McDermott laments physical distance between lovers and the longing that ensues. "Scars From Another Life" has a Bruce Springsteen feel to it as McDermott reflects back on life before his recovery from addiction.  "She's Gonna Kill Me" is about coming home late after running around and drinking at the bars until last call.

"She say's she's gonna kill me, kill me,
If I don't kill myself"

McDermott's waltz ballad "Is There A Kiss Left On Your Lips" poetically asks whether a lover still has desire after all she has been put through by her man.  A acoustic delta blues tune, "A Deal With The Devil",  is a slowly building call and response piece of almost spiritual prayer. McDermott provides a full on acoustic folk treatment to the "The Silent Will Be Singing", a tale of christian religious spiritual renewal in a world gone mad.  It is followed by a piano based spiritual, "Where The River Meets The Sea."  The track "Italy" is the final song  and it almost sounds like an after thought. It is a folk guitar and harmonica homage to the location of McDermott's 2009 marriage and renewal.

Over the past twenty or so years Michael McDermott has come full circle.  McDermott's songwriting is better than ever because of it.  It is a miracle.  So is the album.  It was recorded in its entirety in eight days.

"This world has all gone mad,
It's funny and it's sad,
But I can hear the freedom bells a'ringing"