Marillion from a Swedebeast's point of view; Market Square Heroes 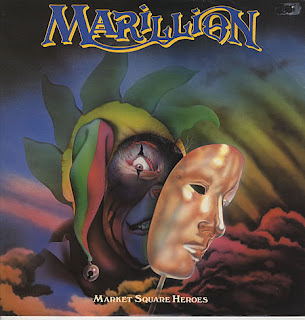 Marillion from a Swedebeast's point of view


When I first contemplated writing about Marillion's back catalogue, I was going to concentrate on their studio albums only and nothing else. Not long after getting the ball rolling I realised something was amiss...where was their breakthrough song Market Square Heroes? My mistake dawned on me, it was only released on 7" and 12" vinly. Despite that fact, Marillion's very first release had to be included and should naturally start my chronological "book" about one of England's best ever bands. At the time of writing I have no idea how many chapters I will pen and what shape they will take, but there will be quite a few. After all they have released 17 studio albums so far and who knows how long this project is going to take.

So put on your parka, grab a pint of the beverage of your choice and welcome to my world of Marillion!

Not many bands in the history of recorded music can claim to have kick-started their career with a 7" release that never made it onto a studio album. Marillion, on the other hand have never been an ordinary band. Market Square Heroes peaked at #53 in the English singles chart which might not be all that much hoopla for commercially-directed artists but for Marillion I'm sure this was more than they had hoped for. They already were signed to a major label, EMI, and they had garnered quite a following even before this release which did increase with Market Square Heroes. The other side of the coin though is they received more than their fair share of negative criticism, mainly that they were mere Genesis et al rip-offs. If this affected the band negatively or not I don't know but it seems to me that Marillion fed off of all those harsh words with their future releases as they went from strength to strength....but more on that later, I seem to get carried away and let's focus on Market Square Heroes.

The title track basically starts off with tribal-like drumming from Mick Pointer which is quickly backed up by Mark Kelly fantastic key-work giving the music an upbeat feeling throughout the entire song before the rest of the band joins in. Once Fish starts to sing though I quickly realise that the song is not about shiny happy people. To me it's a call to arms for the common man against the injustices governments pile upon their people. The start of the 80's  had seen several riots in England and Market Square Heroes is Marillion's response to them.

It's a compelling track where Marillion immediately show their superior song-writing skills. They write extremely memorable great music without giving in to the MAN, i.e. the record label. We'll see this throughout as my Marillion story moves along. An excellent song and a great start to a long career.

Three Boats Down From The Candy is the B-side of the single and clearly shows the band's progressive leanings. Whereas the title track is more accessible, the flipside song is more intricate displaying the members technical prowess. Lyrically it deals with broken misinterpreted and desperate love. In the end it doesn't work out and you break up but years later you looking back on the pictures from your time together, you second-guess yourself and think 'what if we took it further? What would our lives have been?'

On the 12" version a third song is included, Grendel. This 17-minute+ monster of a song is Marillion's adaption of the Anglo-Saxon poem Beowulf. And they've done a great job with it. In all honesty I haven't read the actual poem but that doesn't matter because the band takes you on a brilliant journey where Beowulf searches for the monster Grendel to kill him in order to stop the latter's brutal killings and eatings of everyone he sees. A truly epic song that definitely brought out the band's progressive influences.

Apart from kick-starting their career with this release Marillion also started a partnership with artist Mark Wilkinson who basically made all the covers for their releases up until the departure of singer Fish in 1988.
Since these three songs never were released on a studio album and the single is long out of print check out the compilation album B'Sides Themselves where they are all present.

I didn't get into Marillion until the release of their second album Fugazi. I might have heard Market Square Heroes on the radio a few times prior to becoming a fan. But honestly I do not remember that so this chapter is based on a fanboy's backtracking of a favourite band's back catalogue.