Jon Herington - Time On My Hands 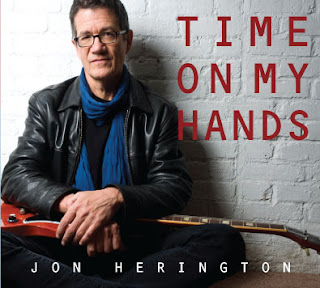 Steely Dan's current lead guitarist rocks on his own with Time On My Hands. Jon Herington hails from New Jersey, used to open for Bruce Springsteen, is well known as a New York session musician and has played for over a decade with Donald Fagen, Walter Becker and, more recently, Boz Skaggs.
The album Time On My Hands is Herington's fifth solo album. He generally plays a driving bluesy jazz rock. But, as the leader of The Jon Herington Band, which, at its core, is a power rock trio that has played together for decades, Herington gets downright funky. The Band consists of guitarist, songwriter and vocalist Herington, bassist and vocalist Dennis Espantman, and drummer and vocalist Frank Pagano.  For Time On My Hands Herington calls on Donald Fagen and Jim Beard of Steely Dan, Danny Louis of Government Mule and Rob Morsberger to add keyboards.

Herington's guitar virtuosity, voice and songwriting stand out.  The lyrics have a dry sense of humor; the voices and arrangements are tasteful and accessible; and the lead guitar solos - oh my, each is a master course in progressive rock and funk guitar.

As the album starts the audience mulls about as Herington launches into "Shine, Shine, Shine," a classic party rock dance boogie.  Deep bass, funky rhythm guitar with wailing lead parts and a shakin', poundin', hip movin' drum beat get the effort rolling. Then, take a sitar guitar, mix it with the beat from Johnny Otis' classic "Willie And The Hand Jive,"  tweak the lyrics, change the chorus and you have the second track, Herington's "Sweet Ginny Rose." Together, it unexpectedly comes off like a Grateful Dead concert piece.

A soul blues, "I Ain't Got You," is an instant classic that rivals the works of B.B. King. It is a complete song, with clever lyrics, tacit, backing vocals, Hammond B-5 and wailing lead guitar interludes. The album is named after the next track, "Time On My Hands",  which is marked by a quick tempo, booming bass, and call and response rock and roll blues that erupts into a slurry guitar riff party.  It is like an alternate take on Cream's "Tales Of Brave Ulysses."

There is also a softer, folk side to Jon Harington. It shines through on "Runnin' Out Of Time."  Here, the focus is on rhythm guitar and vocal harmonies.  A lead interlude accentuates the harmonies.  It is as beautiful as a mid-1960's Byrds ballad.  Folk gives way to the track "I'll Fix Your Wagon,"  a dissonant rock blues that sounded to me sort of like a cross between John Lennon's Plastic Ono Band  and Robert Johnson's classic "Crossroads."  That obviously puts Herington among some pretty good company. A funky soul piece, "I Heard They Shoot Horses", warps a rock jazz structure and shows why Herington is now Steely Dan's lead guitarist.  It is the most Steely Dan-ish track on the entire album.

The penultimate song is a talking jump blues, "Egirl," a tongue in cheek effort that Herington describes as a being "a tale about a loner with a really good internet connection."  The final track, "The Bucket Song," is a funky soul that would make James Brown proud.

With "Time On My Hands" one can no longer think of Jon Herington as a lead guitarist belatedly added to Steely Dan, or just as a sought after session musician.  Herington has discovered a voice of his own.  It is jazzy, funky, bluesy, soulful and playful and, if you have time on your hands, I suggest you give it a listen.