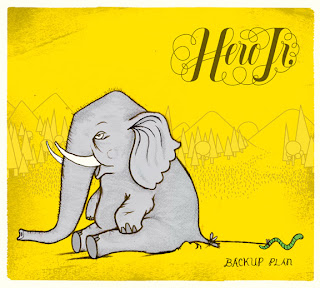 …Hero Jr is a three piece powerhouse from Indianapolis.  Their high energy, hook driven rock and roll comes through in waves with their debut studio album, BACK UP PLAN.  Produced and engineered by the legendary Paul Mahem, it really sets the bar for raw un-adulterated rock and roll like we saw back in the “day” with bands like America, Little River Band, Foreigner, Styx, Boston, BOC, etc…  With strong hooks like what you‘d expect from Green Day…the strong bass riffs the likeness of  Flea from the Chile’ Peppers…the straight forward drums reminiscent of the 80s bands and the guitar stylings’ of Tom Scholz of Boston at times and John Mayer at others....  The strength of the musicianship sets the stage for their lyrics to capture your attention and draw you into their world of impending hope!

As I started spinning this album, I was immediately taken back by “Anne Boleyn” as its huge harmonies reminded me of the music I use listen to when I was just a young musician trying to find my place in the world…inspired by the greats.  Quickly followed up by “Strongest Weakness” I was intrigued by the name of the song, and quickly drawn into the Boston sounding climbing riffs during the chorus…the harmonic tones of the bass and pounding drums reminding me that there are still artists that write ROCK!  “What’s on the Inside” startled me a bit as I wasn’t expecting a “Quentin Tarantio esque” soundtrack song….the hook:  “What’s on the inside is all that matters any more…”…very prophetic.

Time to take a break to get a beer…the evening is here!  What did I come back to?  “Naked!”  All I can say is WOW!  Now my face is melting off and I’m making a note to go to iTunes and purchase this album and be one of the first.  This song reminds me quickly that Hero Jr is a throw-back to the 70s and 80s…how old are these guys anyway?   The next song, “Holding on Without Handles” rewinds us back to the earlier song, What’s on the Inside….very dreamy and floating.  The guitars seemingly float all around my office…then out of nowhere the piano starts tinkling like something out of a Yanni album?  I love it…I’m inspired to go play my own keys…

“Bottom of  the End” is yet another color in their pallet that they ever so delicately place on their canvas.  Is this the same band?  I know it is…but, it isn’t until the pre-chorus/chorus that I hear the lead singer’s (Evan Haughey) unique style come out.  I like this in that, similar to the classic bands with more than one lead singer, it keeps the music interesting and colorful.

“Learning to Stand” starts with hypnotic drums pounding through my head with seemingly effected vocals (but they aren’t)…this song makes me feel like a kid again…my head bopping about.   “Love enough for Everyone” starts with a very cool guitar riff then completely disappears for about 2 seconds making me look at my stereo in disbelief…catchy idea.  Now I feel as if I am  at a concert whereas U2 and THE CURE got together to write a hit, and a hit it is!

“Cracked and Kindred” is a smokey-dreamy  song that starts out like a song you’d expect to hear on My Chemical Romances’ Black Parade Release.   “Matchstick Tongue”…finally a song that starts out on bass,  nice change. This song starts out like something from an old RUSH song  with some POLICE guitar effects.  “I was made to hold you” reminds you that the album is nearly over….love the lyric- “Taught when we were young, how to love someone.  Told that we would find, a love one of a kind…”  This song gives us hope…” Rarely do I see, love that makes me believe…”   This band writes songs that give hope and reminds to have fun and not take life too seriously.

I love this band!  I love every song on this album…and, they are my new Hero’s!!!!

Jill said…
and it you love this one, get their other two, self titled, Hero Jr is what stole my heart in the first place. Evan's solo album, called Evan is heart stirring. EXTREMELY heart felt, sexy, raw, shocking. LOVE LOVE LOVE.
November 16, 2012 at 8:42 AM